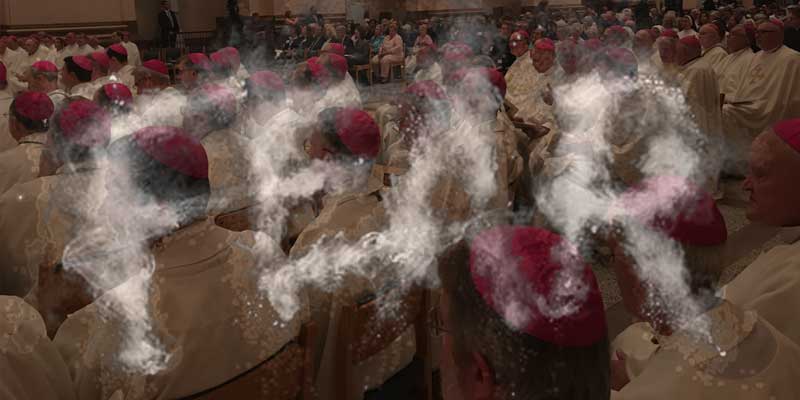 I write to you as a former senior staffer at the United States Conference of Catholic Bishops (USCCB), where I was entrusted with a range of some of the most sensitive work for the United States bishops. I hope I served you well over my eleven years at the USCCB, the last six (ending December 31, 2017) as the executive director of government relations. Our work together was often not as immediately as effective as we wished, but we did faithfully represent the Church’s policy positions during difficult times in our nation’s history. I was and remain committed to the success of your leadership in the Church, and I am grateful to have been able to serve the Church through my service to each of you.

I also address you as the father of three young children, whose lives stand to be shaped by the decisions you will make in the coming days. It is this last point that, more than anything, drives me to share a few unsolicited thoughts about the critical moment we face in the Church.

The revelations of Archbishop McCarrick’s horrid behavior, its long-term cover-up, and the failure to hold accountable those who empowered him could cause the faithful to distrust all bishops. This is a tragedy. I know firsthand that you are faithful men who give your lives to the Church out of your love for Jesus. Though the administrative nature of your work may lead many to look upon you as mere managers, I can attest that those of you whom I know personally are men of deep faith with fatherly hearts. I consider it my greatest professional privilege to have worked for the Church on your behalf and to have developed genuine friendships with many of you.

There is, however, something wrong with how the body of bishops functions as an assembly and how bishops relate to and interact with one another. Far too often, fear appears to govern what is done or not done by you as a body. There is the fear of disunity, fear of conflict, fear of disrupting a superficial collegiality, and today, more than ever, fear of Rome. Though the pressure you face—each in your dioceses and together as an assembly—is intense, the bottom line is that it sometimes appears that many of you are governed by fear of each other and of the institutional order more than by the fear of God.

It has also been my observation that your work as an association of bishops leads many of you to value the appearance of unity over adherence to principle. This habit, in turn, leads to patterns of conflict avoidance. In some instances, this is the path of charity. Conflict and division are not good things. Far too often, however, I watched good men back away from conflict when what was needed was confrontation and forthright debate. This culture of fear enabled the likes of Theodore McCarrick to attain power and to scheme and maneuver at the highest ecclesial and political levels.

All serious observers of the Church see that the current ecclesiastical situation stands on the edge of a cliff. It seems to me that there are two dominant camps among the bishops in the United States, and perhaps worldwide. One regards the Church as a platform for political interests. My professional experience taught me that this group includes key authorities in Rome. The other regards the Church as a pastoral reality. This second group, while genuinely desiring to serve, is reluctant to address critical issues if doing so would entail conflict with Rome.

The curial advisors of the Holy Father have failed to understand the nature of the present crisis. They have chosen a path that only exacerbates it. They have failed to undertake a swift and full investigation of the McCarrick case. The Vatican’s failure to act is now aggravating the real harm done to the Church. In the end, however, the faithful in the United States will hold you—and not the curial officials—responsible for what does or does not happen in the wake of the most recent scandals.

I urge you to petition forcefully for an open investigation led by the laity. Do not allow a false notion of unity to prevail, a false unity in which your integrity as bishops is sacrificed to expediency.