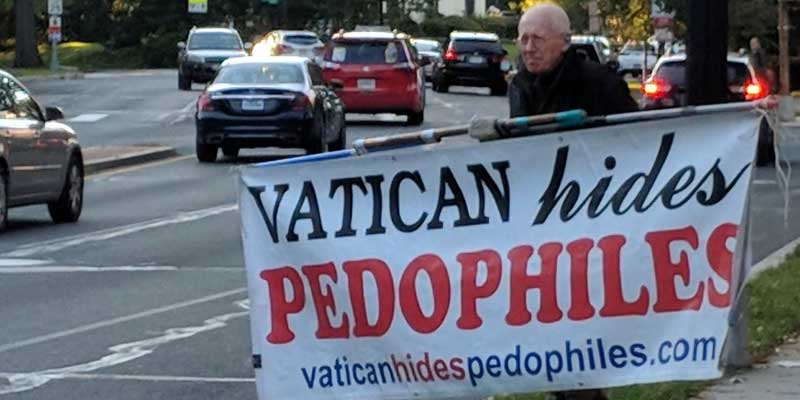 There’s a honk. And then a thumbs-up.

A wave, another thumbs-up. A flash-flash of headlights. Honk! Honk!

“This is a good day,” declared protester John Wojnowski, who has been a fixture outside the Vatican’s U.S. mission in Northwest Washington for more than two decades.

When he began trying to tell the world about sex abuse in the Catholic Church — and about what he says a priest did to him when he was 15 — there were a lot of bad days. There was silence. And stares.

“And they give me the finger,” said Wojnowski, who is now 75. And many years ago in his 20-year pilgrimage toward redemption, someone walked out of the Holy See’s diplomatic outpost on Massachusetts Avenue and spit in Wojnowski’s face, he said.

Since 1997, Wojnowski has stood outside the Apostolic Nunciature during rush hour explaining his lifetime of pain, depression, anger in a series of giant signs:

“MY LIFE WAS RUINED BY A CATHOLIC PEDOPHILE PRIEST”

He flips and turns the signs for hours so they face incoming and outgoing traffic, delivering his message to the thousands of motorists, joggers and cyclists streaming past. He stares people down to make eye contact. To read the sign. To know his story. He demands they know.

“How many people look away,” he said to the drivers of oncoming cars who looked away, “from the ignorance, the stupidity, the malevolence of the Catholic Church?”

There are plenty of people like him around Washington — the seemingly lost-cause protesters — though few have his stamina. He lives in Maryland and takes a train, Metro and bus to his post, a three-hour journey, almost every day. In the sun, the rain and the cold.

This week, after a trip to Florida and some time off to help his blood pressure settle, Wojnowski returned to his protest for the first time since the Catholic sex abuse scandal ripped through Washington, since Cardinal Theodore McCarrick resigned amid abuse allegations, since a list of credibly accused priests was released, since Pope Francis accepted the resignation of Washington’s archbishop, Cardinal Donald Wuerl, over the spreading scandal. This week, D.C. Attorney General Karl A. Racine opened an investigation into alleged sex abuse by priests in the nation’s capital.

Now the reaction he gets is a bit different.

“Yes, I think people believe me now,” he said, after a series of red-light honks. It was a busy day on his block. There was a reception at the Vatican mission, so officials were pouring into the semicircle drive, handing their cars to the valet attendants who all know the protester.

Wojnowski got excited when he saw the flash of a violet zucchetto — the skullcap worn by a bishop — through a car window and raised his giant sign like a barbell and waved it back and forth with uncanny strength and control.

“My right arm is now bigger than my left arm,” he explained. The bishop turned away without making eye contact.