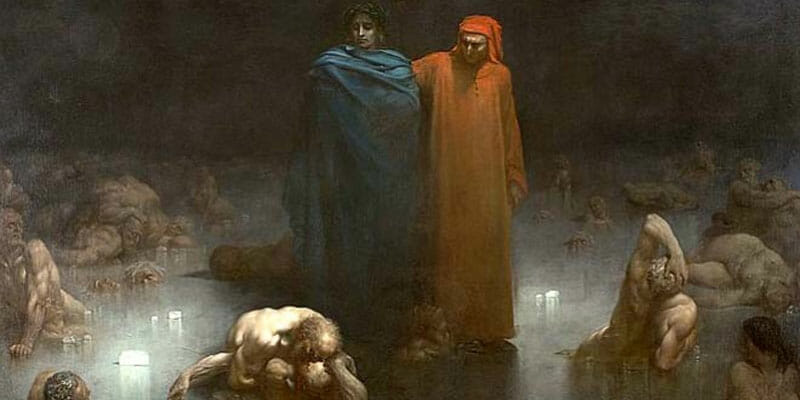 In the Inferno, Dante Alighieri, a critic in his day of Church leadership, famously put the souls of at least three popes in hell, as well as countless other clerics who go nameless, their faces blackened beyond recognition. However, one cleric he does meet along the way is Ruggieri degli Ubaldini (d. 1295), the archbishop of Pisa, who notoriously arrested the city’s strongman, Ugolino della Gherardesca (1220-1289), along with several members of his family, and starved them to death in a tower.

Dante’s fantastical encounter with Ruggieri and Ugolino in the Inferno takes place on a vast lake of ice near the bottom of hell. Here, frozen for eternity, are the souls of sinners condemned for treason: some for betraying their city or country, and others for betraying their kinsmen. Dante is not far from the bottom of the pit, where he will soon come face to face with Satan, a giant demon, frozen in ice to his waist, who eternally chews on the bodies of three of history’s most infamous traitors, Brutus and Cassius, who betrayed Julius Caesar, and Judas Iscariot. Three pairs of legs dangle from the demon’s mouth.

As Dante pushes on across the lake, he sees two souls frozen in the same hole. They are encased in ice up to their necks. One of them is repeatedly sinking his teeth into the skull of the other, like a dog gnawing a bone. He is startled by Dante’s presence. He takes his mouth from his “savage meal” and wipes his lips on the other’s hair. He introduces himself as Count Ugolino. “And this,” he says of the other, “is the Archbishop Ruggieri.”

Ugolino and Ruggieri were Dante’s contemporaries. Both where partisans in a conflict between two armed factions that roiled much of Italy in the thirteenth century, and both were accused of treason, Ugolino, Pisa’s podestà or political leader, for switching sides in the conflict, and Ruggieri, a sometime ally of Ugolino’s, for rising up against him and for capturing him by deception. Dante knew the story, which, when passed through his poetic imagination, comes down to us as one the most disturbing passages in the Inferno.
“You’ll see me speak and weep at the same time,” Ugolino says, as he begins to tell Dante his tale. He and two of his sons and two of his grandsons pass several months imprisoned by Ruggieri in a Pisan tower. One morning at the hour when they were customarily brought food, they were awakened by the sound of hammers. The jailers were nailing shut the tower door. Ugolino says that he looked “without a word” into his sons’ faces.

I did not weep, I had so turned to stone
Within me. They wept. And my little Anselm
Said, ‘You stare so… Father, what is it?’

At that I shed no tears, and I said nothing
In answer all that day nor the next night
Until another sun rose on the world.

On the third morning, Ugolino awakens to see four faces looking at him. In desperation he bites his own hand but says nothing. “We kept silence,” Ugolino says, as the ordeal went on for four days. Soon his sons begin to succumb to starvation.

After we had come to the fourth day,
Gaddo threw himself down full length at my feet
And cried, ‘Father, why don’t you help me?’

He died then, and just as you see me
I saw my three fall one by one by one
Between the fifth day and the sixth …

There is an implication in the text that Ugolino turned to the flesh of his own sons to ward off the inevitable effect of starvation. When he finishes speaking, Ugolino’s eyes flash with rage, he seizes Ruggieri’s skull, and sinks his teeth into it again.