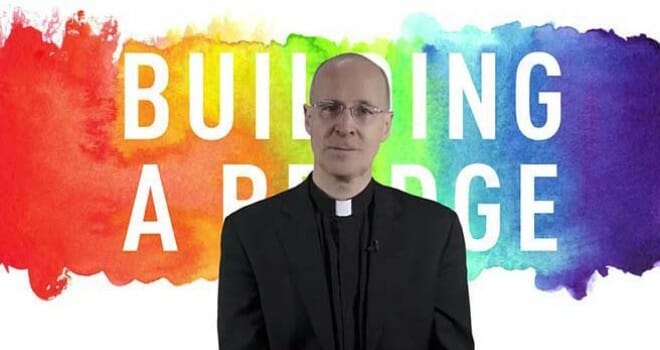 What the Church holds to be true about human sexuality is not a stumbling block. It is the only real path to joy and wholeness. There is no such thing as an ‘LGBTQ Catholic’ or a ‘transgender Catholic’ or a ‘heterosexual Catholic,’ as if our sexual appetites defined who we are; as if these designations described discrete communities of differing but equal integrity within the real ecclesial community, the body of Jesus Christ. This has never been true in the life of the Church, and is not true now. It follows that ‘LGBTQ’ and similar language should not be used in Church documents, because using it suggests that these are real, autonomous groups, and the Church simply doesn’t categorize people that way.”  ∼ Archbishop Charles Chaput of Philadelphia

Fr. James Martin, S.J. wrote a book on the Church’s need to build a bridge to the “LGBT community.” In his address to the World Meeting of Families in Dublin he outlined a practical strategy for the Church at all levels, universal, diocesan, and parish, to reach out to this LGBT community with respect, compassion, and sensitivity. The problem is—there is no such community for the Church to reach out to. Fr. Martin is proposing a bridge to nowhere.

Every community is formed by some common bond. The civic community is geographically formed of all those who live in a certain place and are governed under a set of laws. The African-American community consists of those with darker skin and African ancestry, people who face common and fairly distinctive challenges as a minority group. The ASPCA is a community formed by persons who care about the treatment and mistreatment of animals. We might even speak of a loose community of Cubs fans.

Therefore, the LGBT community, if it exists, is formed by some common bond. This bond consists in their common experience of sexual desire for members of the same sex. A man who finds women, and only women, sexually desirable is not homosexual. One who finds the notion of sexual contact with women repulsive, disagreeable, or otherwise unattractive, but who desires such contact with other men is “gay.” And so on with lesbians and bisexuals. The point may seem unduly obvious, even tedious, but it is centrally important. The terms indicated by “LGBT” have to do with the structure of sexual desires and experiences. There are no other criteria for distinguishing gay from straight men, lesbian from straight women. A person with a womb and breasts who identifies as a man is transsexual. If she identifies as a woman she is not. To repeat: There are no other criteria for LGBT identity. The common bond for the LGBT community can only be the desire or inclination to enjoy sexual contact with others of the same sex. This brings us to the nub of the problem.

To have sexual contact—to put it simply, let us characterize this as any sort of physical interaction whose intent and generally realized effect is to stimulate the parties to sexual climax—outside of marriage (and the Church understands this to be possible only between a man and a woman) is sinful. Therefore, all homosexual activity is sinful. From what I have read, Fr. Martin seems to acknowledge this.

On the other hand, to experience homosexual inclinations is not itself sinful, as the Catechism of the Catholic Church states. However, this inclination is an inclination to sin. It can be understood in no other way. Those who belong to the LGBT demographic, whether they act on their homosexuality or not, live with a persistent, clearly identifiable temptation to sin. To be sure, for many of them this is a cross, a heavy burden. As one gay friend puts it, “I wouldn’t wish this [homosexuality] on anyone.” Some gays and lesbians may well find the impulse almost irresistibly beyond their power to control. The wise pastor, the charitable Christian will recognize this. Nevertheless, the LGBT condition is one marked by sin.

If the Church were to recognize an LGBT community and reach out to it—build a bridge—respecting it as a community, then it would be recognizing a structure of sin. As Fr Martin rightly insists, every gay, lesbian, bisexual, or transsexual Christian is loved by God and in virtue of baptism is a member of the Church. However, from this we cannot conclude that the “LGBT community” is part of the Church, because such a community is defined by sin, whether in the behavior or at least the inclination. Nothing else defines LGBT membership.