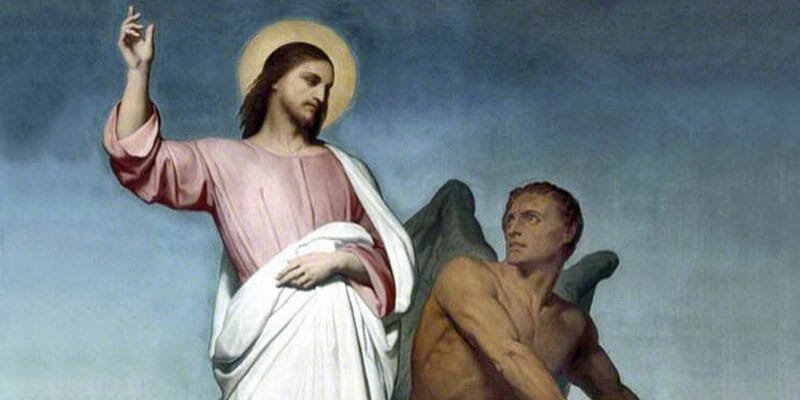 Anyone who wonders why the Catholic Church is in its present crisis need only read Dr. Scott Bruce’s “Do We Still Need to Believe in Hell?” The Wall Street Journal article (9/15-16/2018) recently appeared in its popular weekend review section.

It was a rather typical yet brutal appraisal of the notion of Hell. The author believes Hell is a medieval invention adapted from the ancient myths that talk about a place of punishment for evildoers in the afterlife.

The author looks forward to a day “in some, better future,” when the idea of Hell might be retired from use. It would be “an important step in the maturation of human communities that can mete out justice on their own, without supernatural aid.”

A Cause for Concern
Such a sad commentary is to be expected from the Wall Street Journal with its materialistic and secular outlook on life. Light-hearted musings about Hell serve as a curiosity for those intent upon building a material paradise on earth.

However, Dr. Bruce is a Catholic. He is not only a Catholic but a professor of history at a Catholic university. His is not just any university but the Jesuit-run Fordham University in New York City.

This is a cause for concern, for Dr. Bruce runs no risk in speaking against Hell. He will not be called to task by Fordham for his critique of Hell in the nation’s leading newspaper; he will never be asked to withdraw the book he has just edited about the same topic; and he will tranquilly continue teaching with the many similarly minded professors at Catholic institutions everywhere.

Such inaction on the part of administrators is not surprising to those who have followed the decadence inside the Church in recent decades. Everyone knows there is a lack of concern for orthodoxy at many of the nation’s Catholic institutions. This example just shows that there is no attempt to hide it.

Hell is Scriptural
The denial of Hell helps explain why the Church is in crisis. The Hell-deniers do irreparable harm to the Church, souls and society. The dogma of Hell is foundational for the Church. Take it away and the whole structure of Church teaching comes crashing down.

The notion of Hell has been held from time immemorial. Even Plato, unenlightened by Revelation, perceived the need for Hell, declaring: “Such is the judgment of the gods who dwell in heaven; the good are reunited with the good, the wicked to the wicked.”

The existence of Hell is clearly defined in the Bible. It is mentioned many times in both the Old and New Testaments. It is also unequivocal. Hell-deniers find little room for doubt in the graphic descriptions of this place of terrible punishment of endless duration. Numerous councils have defined Hell as an article of faith. Countless saints have all consistently spoken of Hell in dramatic terms.

“I am filled with fear and trembling,” says Saint Bernard, “and all my bones are shaken at the thought of that unhappy country of the damned.”

Saint Anthony Mary Claret categorically states, “It is of faith that Heaven exists for the good and Hell for the wicked. Faith teaches that the pains of Hell are eternal, and it also warns us that one single mortal sin suffices to condemn a soul forever because of the infinite malice by which it offends an infinite God.”

The denial of Hell is, therefore, a denial of biblical truth and Church tradition. It would imply there is no Revelation. Hell is reduced to metaphor and folklore as insinuated by Dr. Bruce’s article.

No Need for the Incarnation and Redemption
The deniers of Hell call into question the need for the Church. The dogma of Hell is a crucial piece in the logical narrative of the Faith. Without Hell, Christianity would not make sense.

Indeed, if Hell does not exist, then Original Sin cannot exist. For it was as a consequence of man’s fall from grace that Hell became a punishment for those who die unrepentant and unjustified. If there is no Hell, there is no need for the Incarnation and redemption. Without Hell, sins have no consequences. Thus, Jesus Christ need not have become flesh nor died a terrible death on the Cross. His death would be meaningless and illogical. Likewise, Christians would not be bound by a debt of gratitude and love, for Christ would have neither saved nor redeemed them. Christianity would be a great hoax without the notion of Hell.