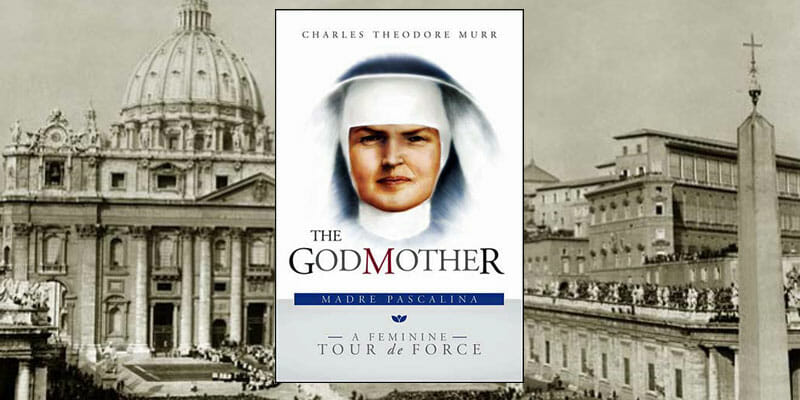 For keen insight into some of the malevolent forces at work in the Church right now, an unexpected source is a fascinating book by Father Charles Theodore Murr, titled, The Godmother: Madre Pascalina. Published in May 2017, for the centenary of Fatima, it is one of the most interesting yet underreported Catholic books of recent years.

The impetus was Fr. Murr’s utterly unique relationship with the figure closest to Pope Pius XII: Sister Josephine Lehnert (1894-1983). Mother Pascalina was so close to, and so trusted by, and so influential to Pope Pius XII, that wise-guys around the Vatican alternately called her La Popessa and Virgo Potens (Powerful Virgin).

Charles Murr was a young American seminarian in Rome in the 1970s. He had a lifelong special devotion to Pius XII. He knew about the iconic Madre Pascalina. Over dinner one day at Il Scarpone restaurant with his colorful friend Monsignor Mario Marini—a classic boisterous Italian who held an important job at the Vatican Secretariat of State—Charlie learned that the old nun was still alive.

“She’s alive?” he asked with astonishment.

“Very much so,” said Marini, adding: “Not everyone’s as happy about that as you seem to be. No one knows better than La Madre where the bodies are buried.”

As a favor to Charlie, Marini made some moves within the Curia and secured an address and phone number. Charlie picked up a phone and took a chance. The rest is history—this history in this delightful book.

Charlie and Madre Pascalina first met in 1973, quickly becoming close friends. She would become his literal godmother at his ordination, the date of which she suggested: May 13, 1977, Feast Day of Our Lady of Fatima. They met frequently until Charlie was sent to Mexico in 1979. He would see her once more in 1983, only weeks before her death. The things she told him constitute a remarkable heretofore unpublished account of the Church in the twentieth century, from the historical to the theological to the ideological—and perhaps even to the level of diabolical, in some cases. At long last, Charles Murr has shared them.

The book’s accounts of Pope Pius XII, from the person who knew him best, are striking enough. So are the insights regarding nearly every twentieth-century pope and even would-be popes such as the excellent Cardinal Giuseppe Siri and Cardinal Giuseppe Benelli, who both barely missed the papacy in the late 1970s. There are compelling stories I had never heard before on Padre Pio, on China’s Cardinal Thomas Tien Ken-Sin, and on Cardinal Edouard Gagnon, a dedicated French-Canadian—and future prefect for the Pontifical Commission for the Family—who was greatly frustrated by the failures of Paul VI to react to what Gagnon had documented (at Paul VI’s request) regarding wholesale corruption of the Curia. There are also intriguing inside tales of the rivalry between Fulton Sheen and Cardinal Francis Spellman, and of the perfectly preserved corpse of Pius IX that Madre Pascalina was there to inspect first, many decades after the pontiff passed.

But getting closer to some of the seeds that were laid for the current chaos in the Church, Charles Murr takes a deep dig into the circumstances around Angelo Giuseppe Roncalli and Giovanni Battista Montini, who assumed the papacy as, respectively, John XXIII and Paul VI. The Madre wasn’t a big fan of either, particularly John XXIII, who she dismissed as un buffone (“a clown”).

It wasn’t always the popes themselves that Pascalina held responsible for certain troubles; it was often the men they surrounded themselves with and naively listened to and were often misled by. Take Pope Paul VI, whose right-hand man in dealing with murderous communists was Cardinal Agostino Casaroli, whose counsel on handling the Soviets and Communist Bloc despots was often downright lousy and counterproductive. Of course, Casaroli and Paul VI and John XXIII were certainly not Marxists, but they thought they could deal with Marxists, that they could negotiate with them, that they could even accommodate them. Like Pope Francis, these two popes were heavily influenced by key advisers (who they chose themselves) who were leftist-progressives who gave them bad advice in dealing with enemies of the Church, sometimes internal enemies.

As to Paul VI, we know about the tragic case of Cardinal Mindszenty as an indicator of his embarrassments in trying to satisfy Moscow. Roncalli likewise had his share. For Vatican II, according to Madre Pascalina, the one thing that Pope Pius XII had wanted ahead of time—and yes, she says it was Pius XII who had the initial idea for a council—was an unequivocal condemnation of communism. And yet, that was “the one thing that Roncalli absolutely refused to do.” (This adds new insight to my piece last year on Vatican II’s unpublished condemnations of communism.) This refusal, revealed Madre Pascalina to Charlie, was done as a promise to the Soviet government and the Kremlin-controlled Russian Orthodox Church in the name of ecumenism, and it presaged later such moves by Paul VI.

As for Paul VI, who many of us admire in key respects, The Godmother surely nailed it when she described him as “not a strong man” who was “always easily manipulated.” He frequently struggled to “see the obvious” and realize just how gravely “the Church had enemies,” even as he came to realize that “the smoke of Satan had entered the Church.”

I personally believe this is very fitting to our situation with our pope today, who I contend is far more naïve than nefarious, duped than duplicitous—but has nonetheless created his own terrible mess by surrounding himself with progressive Church officials who have served him dreadfully.

Indeed, there is so much in this book that is important if not profound to current realities as we watch the crises in the Church unfold, from my home dioceses in Western Pennsylvania to Cardinal McCarrick to the unacceptable happenings at the Vatican under the nose of Pope Francis.

Charles Murr calls attention to some dubious characters, if not outright evildoers, in the latter twentieth-century Church. And that’s where Murr’s eyewitness testimony, based on what he saw in Rome in the 1970s and what Madre Pascalina conveyed to him, is so rich and relevant. What we’re seeing right now are bitter fruits of the rotten seeds sown by a network of progressives, liberals, and the very “modernist” heresy that Pope Pius X warned about in 1907.