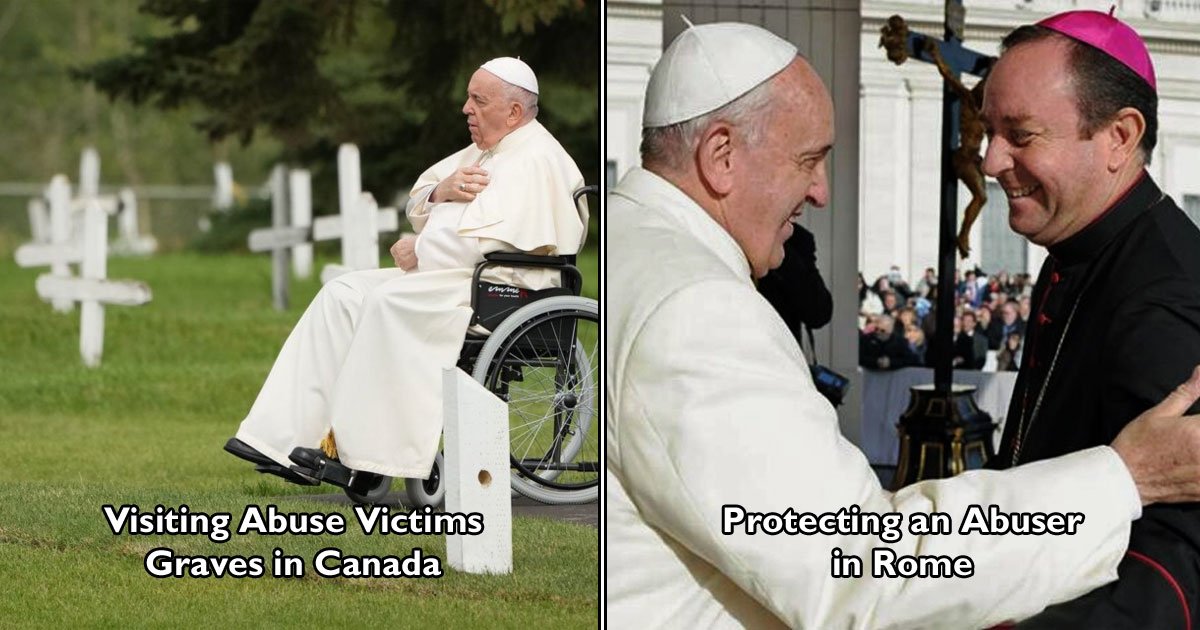 Pope Francis is sorry and not sorry. Last week, he was in Canada to deliver an apology for the abuse suffered by indigenous children in schools run by the Catholic Church. He was rewarded with approving headlines — and an even better photo-opportunity involving a spectacular feather headdress. That may strike you as a cynical attitude to the Pope’s “penitential” journey. Then again, you may not be aware that, right now, Francis is protecting the interests of a sex abuser he made a bishop and then hid in the Vatican.

Under normal circumstances, it would be perfectly appropriate for the Supreme Pontiff to express shame for the persecution of pupils at the Residential Schools operated by the Church in Canada between the 1870s and 1990s. Last year, it was reported that the graves of 200 children had been found near one of these schools in British Columbia. That may be fake news. Some experts believe that the “graves” were soil disturbances and point out that they have not been excavated. No one disputes, however, that children suffered monstrously. Former pupils have talked of savage beatings and being forbidden to speak their native languages. Hundreds of sexual predators were protected.

But this pope has little moral authority to apologise for anyone else’s crimes. To understand why, we need to travel 6,500 miles from the scene of Francis’s meticulously staged expression of remorse in Edmonton to a dusty city in the subtropical north-west of Argentina. Although Orán has only 73,000 inhabitants, it does have a cathedral — a spiky concrete tent that embarrasses even the local tourist board.