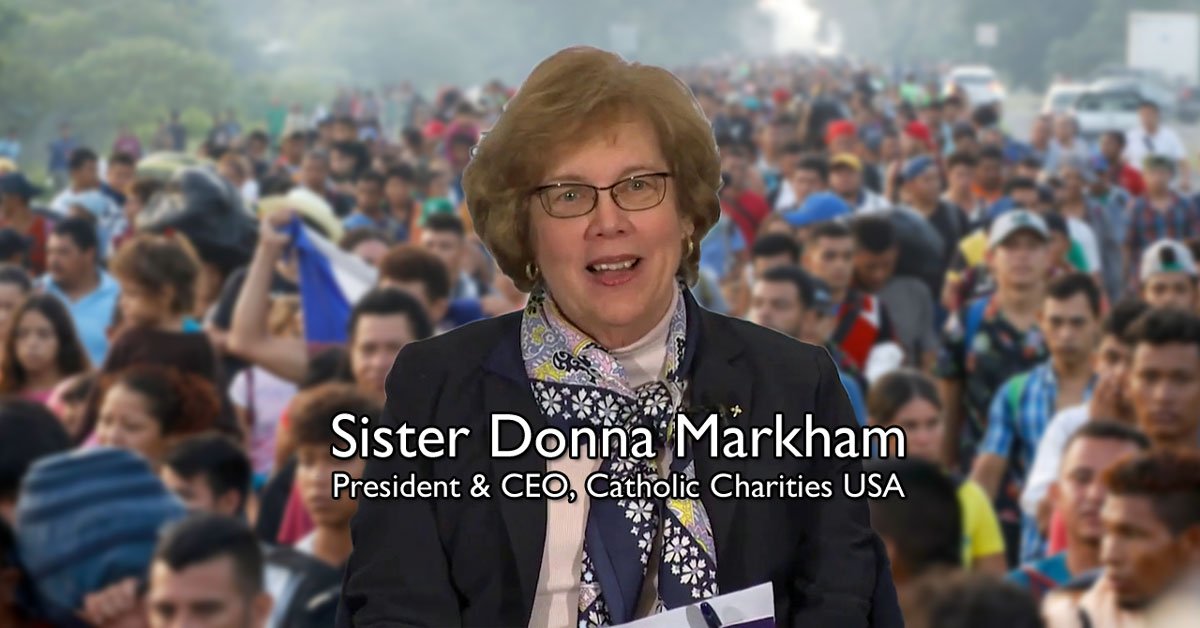 A U.S. Catholic nun who the progressive Left portrays as an apolitical angel of mercy to the “suffering migrants” pouring over America’s broken southern border is in fact a deeply committed social radical.

Donna Markham has even used her elitist ties help thwart Catholic bishops’ attempts to prevent abortion from being covered by Obamacare health plans.

The ruling elite-allied Jesuit Order furiously weaved its Mother Teresa of the Undocumented narrative on Feb. 16 on its flagship publication website America:

The angry emails and phone calls have been pouring in this week, and Donna Markham, O.P., the president and C.E.O. of Catholic Charities USA, has been among C.C.U.S.A. staff shocked by all the vitriol.

“We certainly have received hateful, hateful calls from people who say they are Catholics,” Sister Markham said, “and speaking to us in language that I would never repeat and threatening our agencies. It’s a very sad situation.”

The unpleasantness followed quickly in the wake of press releases and news reports about a Freedom of Information Act lawsuit filed by the political action groups Judicial Watch and CatholicVote. The suit demands records of communication between the U.S. Departments of Homeland Security and of Health and Human Services “with Catholic organizations near the Texas border that were aiding illegal immigrants.”

The most prominent culturally leftist subversive priest in the U.S. today, Jesuit Father James Martin, was quick to voice his outrage:

The attack on Catholic Charities–Catholic Charities!–by supposedly Catholic groups is both insane and immoral. Next, they’ll be attacking Jesus for helping the “undeserving poor.” @CCharitiesUSA is one of the US church’s brightest lights.

Poor Sister Markham just can’t understand why some hate-filled people are dragging politics into her efforts to help illegal aliens make their way into the United States:

“I’m mystified by any group that would call itself Catholic that is attacking the Catholic Church and its ministry,” Sister Markham said. “Our work with those who are poor takes its impetus, really, from our Catholic faith, and the Gospel mandate that calls all of us for over 2,000 years, especially as Catholics, to care for those who are vulnerable, homeless, hungry and suffering.

“It’s Matthew 25,” Sister Markham added. “And Catholic Charities in particular has been doing this since 1910. This is really our identity, and we don’t have any intention of stopping this ministry.

“Our work is humanitarian,” she added. “It is not political. It is grounded in our faith.”

That’s twice in three paragraphs that Sister Markham has questioned the Catholic standing of anyone who would dare call her out on her destructive work.

But this nun is far from the quiet little servant tilling the fields of the Lord that she pretends to be. Sister Markham is a former Georgetown University executive and a member of the Adrian Dominican Sisters, an order of women religious with a decades-long reputation for avowed leftist radicalism.

Continue reading at the World Tribune

TAKE ACTION: Contact Sister Donna Markham at 703-549-1390 and respectfully let her know how you feel about Catholic Charities involvement in the illegal alien invasion of our nation.