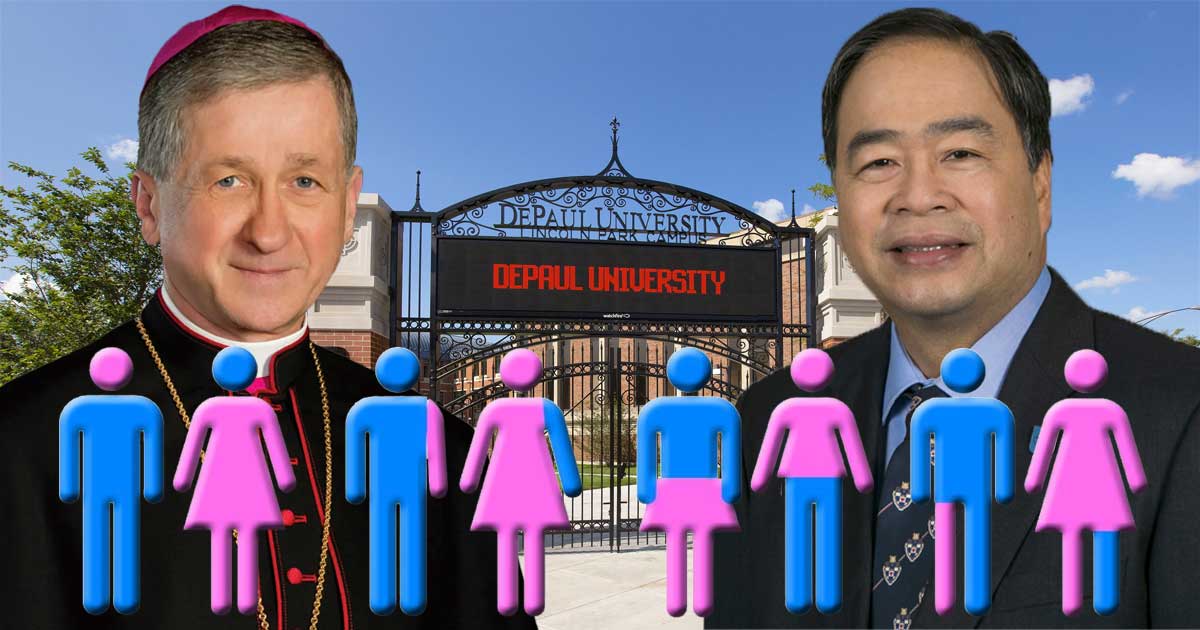 DePaul University, the largest Catholic college in the United States, apparently “jumped at the opportunity” to provide students with at least eight different genders to choose from on official college documents and other student life forms, despite the fact that it likely goes against official Catholic Church teaching on God’s creation of “man” and “woman.” The change comes as DePaul’s Student Government Association (SGA) recently stated that “misgendering” somebody is an “act of violence.”

The College Fix recently flagged that DePaul’s student portal known as “Campus Connect,” a website used for keeping “information on and for students, faculty and staff for communication and other purposes,” now allows students to “choose either: male, female, intersex, non-binary, transgender male, transgender female, cisgender, unspecified and ‘I do not wish to self-identify.’”

The announcement was made on January 4 and Michael Wright, assistant vice president at DePaul’s Registrar Office, said the college wanted to “promote ways for students to express their identity if they choose to do so.”

It appears DePaul itself is having a bit of an identity crisis. Catholic teaching on human sexuality is quite clear.

each of us is made in God’s image as man or woman;
gender identity is determined at conception, genetically, anatomically and chromosomally;
a person must accept that objective identity.

b) The Catechism of the Catholic Church (September 1997 edition), Section 2333, states:

Everyone, man and woman, should acknowledge and accept his or her sexual identity. Physical, moral, and spiritual difference and complementarity are oriented toward the goods of marriage and the flourishing of family life. The harmony of the couple and of society depends in part on the way in which the complementarity, needs, and mutual support between the sexes are lived out

Everyone, man and woman, should acknowledge and accept his or her sexual identity. Physical, moral and spiritual difference and complementarities are oriented towards the goods of marriage and the flourishing of family life. The harmony of the couple and of society depends in part on the way in which the complementarities, needs and mutual support between the sexes are lived out. According to this perspective, it is obligatory that positive law be conformed to the natural law, according to which sexual identity is indispensable, because it is the objective condition for forming a couple in marriage.

The profound falsehood of this (gender identity) theory and of the anthropological revolution contained within it is obvious. People dispute the idea that they have a nature, given by their bodily identity, which serves as a defining element of the human being. They deny their nature and decide that it is not something previously given to them, but that they make it for themselves. According to the biblical creation account, being created by God as male and female pertains to the essence of the human creature. This duality is an essential aspect of what being human is all about, as ordained by God.

Canon 216 states that no organization can lay claim to the title “Catholic” without the consent of competent ecclesiastical authority. That means that DePaul can only continue to identify itself as “Catholic” organization with the permission of Cardinal Blase Cupich.

TAKE ACTION: Send an email to Depaul’s president A. Gabriel Esteban and Chicago’s Archbishop Cardinal Blase Cupich asking that DePaul respect Catholic teaching regarding human sexuality or be deprived of its Catholic identity.