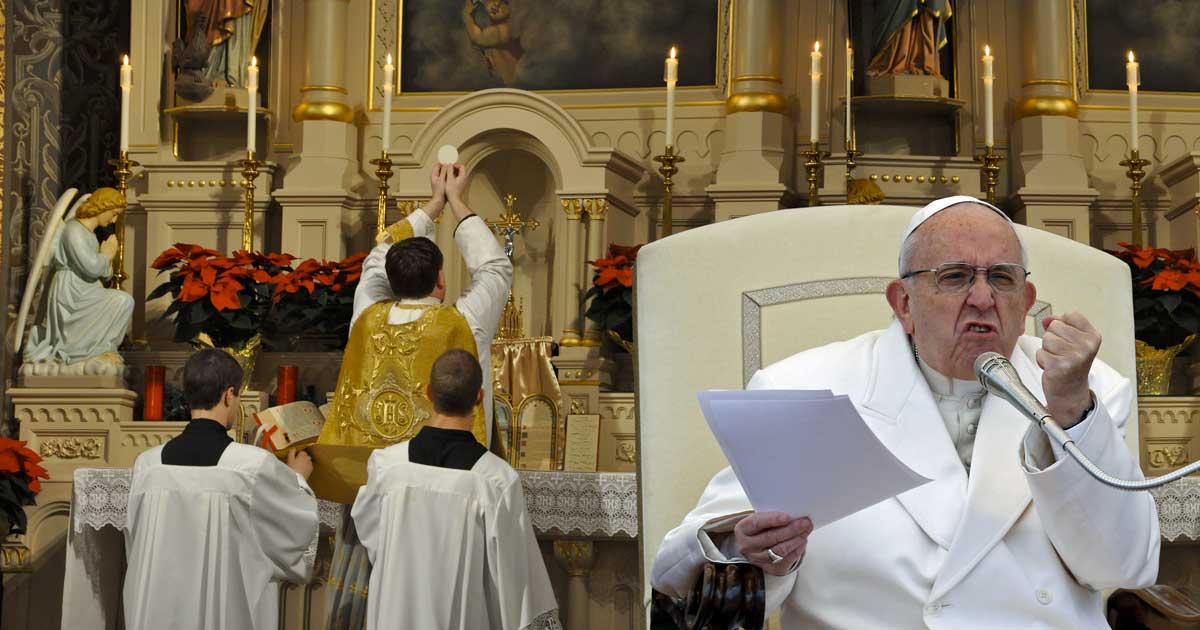 Some consider the Responsa a response to the Roman rite, but in this essay we shall show this is not the case. We submit our interpretation to the judgment of hierarchical authority and declare from the outset that our text aims only to deepen reflection on the hermeneutical criteria that are needed to read the regulations promulgated by the Holy Father Pope Francis, while being faithful to the guidelines he has given to the Church in his magisterium. Needless to say, we are grateful for any comments that might allow us to improve or correct any defective point our study might have.

Although it is tempting to read these texts (TC and RAD) in a fundamentalist fashion, above all we must avoid interpreting or applying Traditionis Custodes and the Responsa ad dubia rigidly. We must take into account the specific way Francis asks us to interpret and live the law. We must do exegesis in the way the Pope himself has asked us to, with freedom and discernment, giving priority to charity. Above all we must avoid rigidity, insofar as, according to him, “Rigidity is not a gift of God.”[1]

The Holy Father points out that one must be

particularly concerned to offer understanding, comfort, and acceptance, rather than imposing [upon needy souls] straightaway, as if they were a rock, a set of rules [be they liturgical, canonical, or disciplinary] that only lead people to feel judged and abandoned by the very Mother called to show them God’s mercy.[2]

Indeed, many souls (both laymen and priests) feel abandoned by the Church in the face of the publication of Traditionis Custodes and the Responsa.

I. THE EXEGETICAL KEY: DISCERNMENT

Now, the key to interpreting and applying TC and RAD is discernment, which ultimately cannot be applied from the frigidity of a clerical desk (be it Roman, episcopal, or parochial)—since “clericalism is a perversion.”[3] Rather, the priest must go among God’s people as a shepherd among his sheep, willing to give his life for them (cf. John 10:11).

Natural law should not be presented as an already established set of rules that impose themselves a priori on the moral subject; rather, it is a source of objective inspiration for the deeply personal process of making decisions.

This implies that Traditionis Custodes and the Responsa are merely a “source of inspiration for the deeply personal process of making decisions.”[4] Moreover, one must take into account that, as Pope Francis says, the “attitude that would solve everything by applying general rules”[5] is mistaken and that it is “not helpful to try to impose rules by sheer authority.”[6]

Indeed, according to Pope Francis, shepherds “who smell of sheep”[7] cannot coldly apply rules, but must make an “ongoing”[8] and “evangelical discernment [which] is the approach of a missionary disciple, an approach ‘nourished by the light and strength of the Holy Spirit.’”[9] The key to applying TC, RAD, and other regulations issued by Pope Francis is the discernment of a shepherd who knows his sheep and bears their “smell.”

According to Pope Francis, this attitude of ongoing evangelical discernment—something which requires permanent conversion—is opposed to the temptation of rigorism, which as the Synod Fathers say, comes from the devil and presumes to supplant the discernment of spirits.[10]

In the case of TC and RAD, the rigorist (and hence diabolical) attitude would be to apply these rules “from above” without allowing the shepherd and his sheep the chance to make communal discernment, case by case, in a way analogous to what Pope Francis asks for the discernment of cases of conjugal morality. In the marriage context, he calls for “renewed encouragement to undertake a responsible personal and pastoral discernment of particular cases,”[11] knowing that “the consequences or effects of a rule need not necessarily always be the same.”[12]

Indeed, the Holy Father says in Amoris Laetitia 300 that “if we consider the immense variety of concrete situations, it is understandable that […] a new set of general rules, canonical in nature and applicable to all cases could not be expected.” Therefore, neither should it be expected that TC or RAD are applicable in all cases.

Just as “a pastor cannot feel that it is enough simply to apply moral laws to those living in ‘irregular’ situations, as if they were stones to throw at people’s lives,”[13] neither should bishops think that it is enough merely to apply moral laws to the priests and laymen who live in “irregular” liturgical or ritual situations, as if these las were stones to throw at people’s lives. By analogy with Amoris Laetitia 305, this casting of regulations as if they were stones (be they of TC, RAD, or the Code of Canon Law) at traditional communities “would bespeak the closed heart of one used to hiding behind the Church’s teachings, ‘sitting on the chair of Moses and judging at times with superiority and superficiality difficult cases and wounded families.’”[14]

In the wake of TC and RAD, many families feel hurt because they feel they are being discriminated against when choosing which rite they want their children to be baptized, confessed, or confirmed in. Indeed we can easily imagine difficult cases such as if five brothers are confirmed according to the solemn traditional rite but the sixth, on top of having to wear his older brother’s hand-me-downs, must now be confirmed in a different rite that appears less beautiful to him.

To presume, therefore, to apply the general regulations of TC and RAD without considering each specific case “would bespeak the closed heart of one used to hiding behind the Church’s teachings, ‘sitting on the chair of Moses and judging at times with superiority and superficiality difficult cases and wounded families.’”[15]

Indeed, the Pope says that “it is reductive simply to consider whether or not an individual’s actions correspond to a general law or rule.”[16] He also affirms that “although there is necessity in the general principles, the more we descend to matters of detail, the more frequently we encounter defects”[17]; that “general rules […] cannot provide absolutely for all particular situations”[18]; that “what is part of a practical discernment in particular circumstances cannot be elevated to the level of a rule,”[19] because “that would not only lead to an intolerable casuistry, but would endanger the very values which must be preserved with special care”; that “discernment must help to find possible ways of responding to God and growing in the midst of limits”[20]; that “by thinking that everything is black and white, we sometimes close off the way of grace and of growth, and discourage paths of sanctification which give glory to God”[21]; that “a small step, in the midst of great human limitations, can be more pleasing to God than a life which appears outwardly in order, but moves through the day without confronting great difficulties”[22]; and that “fraternal charity is the first law of Christians”[23] (cf. John 15:12, Galatians 5:14).

If, as Pope Francis desires, discernment must be increasingly decentralized (he does declare, after all, that he “is conscious of a need to promote a sound decentralization”[24]); if he believes that, as the Pope requests, “each Christian and every community must discern the path that the Lord points out”[25]; if we take seriously the papal exhortation that “each particular Church undertake a resolute process of discernment”[26]; if we aspire to carry out with our brethren “a wise and realistic pastoral discernment”[27]; then the agency of the laity is fundamental in this discernment, since Pope Francis asserts that “God furnishes the totality of the faithful with an instinct of faith—sensus fidei—which helps them to discern what is truly of God.”[28] This implies that laymen interested in participating in the traditional Mass should participate in the process of discerning how to interpret and apply TC and RAD.

Indeed, just as “it is not advisable for the Pope to take the place of local Bishops in the discernment of every issue which arises in their territory,”[29] neither is it advisable for bishops to replace priests—they who live among the sheep—in the discernment of all of the issues that arise in their dioceses, especially when they are working to heal wounds on the peripheries, be they geographical or existential.

Decentralization of discernment must be pursued with particular zeal during this Synod on Synodality, since the Synod of Bishops, called by the Pope, demands that we “initiate processes of listening, dialogue, and community discernment, in which each and every person can participate and contribute.”[30] The bishops also tell us that God’s people “shares also in Christ’s prophetic office”[31] (LG 12) and that “in a synodal style, decisions are made through discernment, based on a consensus that flows from the common obedience to the Spirit.”[32]

The key, therefore, is discernment, and the opposite of this discernment is a rigidity that seeks to apply the general norms of TC and RAD to the letter.

Pope Francis has firmly condemned this rigidity. “The rigidity of the hypocrite has nothing to do with the law of the Lord,” he has stated, “but has to do with something hidden, a double life that makes us slaves and makes us forget that being on God’s side means living in freedom, meekness, kindness, and forgiveness.”[33] “Jesus repeats the word ‘hypocrite’ many times in reference to the rigid,” the Pope insists, speaking of “those who have an attitude of rigidity in fulfilling the law.”[34] “Behind all rigidity there lies something ugly that is not of the Holy Spirit,” he declared.[35]