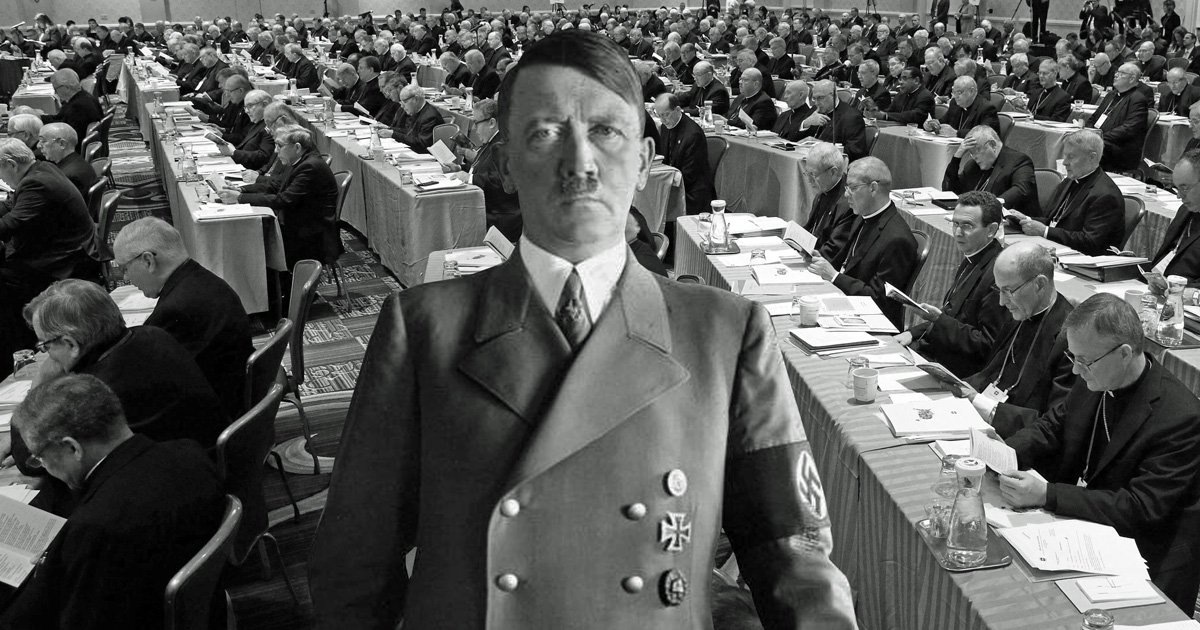 How many of today’s U.S. Bishops would have had the courage to condemn the evils of Adoph Hitler if they lived in Germany during his rise to power?

In pre-World War II Germany, most Protestant and Catholic Church leaders remained silent and failed to speak out against the truly non-Christian policies implemented by Adolf Hitler and the Nazis. Denouncing these fellow ministers and priests as vendors of “cheap grace,” German Lutheran pastor and theologian Dietrich Bonhoeffer helped to found the Confessing Church, whose adherents refused to compromise their Christian beliefs even under threat of persecution and martyrdom.

Even though Adolf Hitler was baptized Catholic, he was honest enough to recognize that the policies he promoted clearly placed him outside the Church. Nowhere is it recorded that he presented himself as an adult for Communion. However, had he done so, it is safe to say there probably would have been German bishops and priests who would have administered the Eucharist to him. While Germany’s bishops conference was forced to admit some 85 years later the embarrassment of their predecessors’ complicity with evil, it appears the lessons of the past have not been learned by Rome and the U.S. episcopate.

When President Joe Biden met recently with Pope Francis, he left the closed-door meeting by telling Reuters that Pope Francis told him “to keep receiving Communion” despite his open support for abortion. Questioning this claim, Bp. José Ignacio Munilla of San Sebastián, Spain tweeted, “These incredible statements reveal the moral character of those who are capable of compromising and manipulating the pope with the intention of washing their conscience stained by the blood of so many innocent lives unjustly eliminated.”

While Biden’s statement appears to be a source of scandal, particularly for those who believe in the Catholic Church’s teaching on the sanctity of human life from conception to natural death, many Catholics are also scandalized by the pope’s silence and the Vatican’s refusal to deny Biden’s claim. In keeping with the legal maxim, Qui tacet consentire videtur (“Silence renders consent”), one would be led to conclude that the pope in fact said what Biden asserted.

Why the silence on the part of the pope and the Vatican? One explanation is that admitting to having offered Biden such encouragement would seem to violate canon 915 of the Code of Canon Law. It provides that Catholics “obstinately persevering in manifest grave sin” are to be denied Communion. The silence of the chief shepherd amidst the slaughter of the lambs may portend the outcome of the United States Conference of Catholic Bishops’ upcoming meeting in Baltimore.