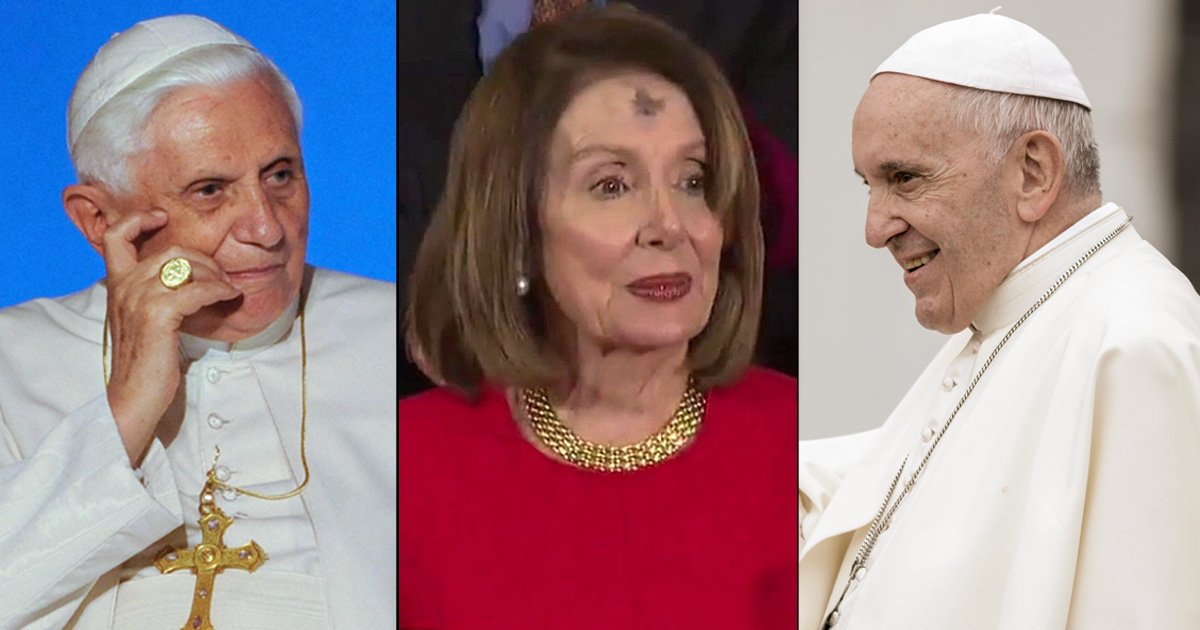 Rome watchers have remarked that Nancy Pelosi’s visit to Rome this month was reminiscent of an earlier occasion, when she met with Pope Benedict XVI in February 2009. There were no cameras at that meeting, but Ms. Pelosi did release a statement afterwards:

“It is with great joy that my husband, Paul, and I met with his Holiness, Pope Benedict XVI today,” she wrote on her official website. “In our conversation, I had the opportunity to praise the Church’s leadership in fighting poverty, hunger, and global warming, as well as the Holy Father’s dedication to religious freedom and his upcoming trip and message to Israel. I was proud to show his Holiness a photograph of my family’s Papal visit in the 1950s, as well as a recent picture of our children and grandchildren.”

Why not Benedict’s leadership?

Veteran Vatican-watcher Phil Lawler gives us a hint: Pelosi said that she had “spoken to the Pontiff about world hunger and global warming. Perhaps those topics were on her agenda, but it is significant that they were not mentioned in the terse Vatican statement. There was no happy-talk from the Holy See: no mention of shared concerns and mutual interests, nothing that would distract attention from the one essential point that the Pope wanted to make.”

And what was Pope Benedict’s “essential point”? The Vatican issues statements after such visits only rarely, so this one was clearly designed to send a message:

“His Holiness took the opportunity to speak of the requirements of the natural moral law and the Church’s consistent teaching on the dignity of human life from conception to natural death which enjoin all Catholics, and especially legislators, jurists, and those responsible for the common good of society, to work in cooperation with all men and women of goodwill in creating a just system of laws capable of protecting human life at all stages of its development.”

In the two meetings that Pelosi had with the Supreme Pontiffs, Pope Benedict reiterated the Church’s timeless teaching on life both in private and in public. Pope Francis, on the other hand, might well have addressed it in private, but was silent about it in public, both after Pelosi’s visit and during his public address the next day.

But there were other messages as well. Vatican regulars have long memories. The Pope’s PR flaks were well aware of the optics surrounding the 2009 meeting: no cameras to portray a smiling Pelosi holding Pope Benedict’s hand; and a frankly blistering public Vatican statement following the meeting.

Last week the optics were reversed. Pelosi was intent on getting that picture that Pope Benedict hadn’t allowed, and Pope Francis generously provided it.

What message was Pelosi sending to San Francisco Archbishop Salvatore Cordileone with that picture, showing her gripping Pope Francis’ hand so tightly that he couldn’t let go?

And what message was Pope Francis sending to Archbishop Cordileone, and to the American hierarchy, when the bishops meet next month at the USCCB’s annual meeting in Baltimore?
In Richard Nixon’s memorable phrase, Pelosi, for her part, was making one thing perfectly clear: She was challenging Archbishop Cordileone to back off.

The archbishop is in a perilous bind; his recent public plea for prayers for Pelosi’s conversion should have been resonated with a resounding and unanimous “Amen!” from his brother bishops. It wasn’t.