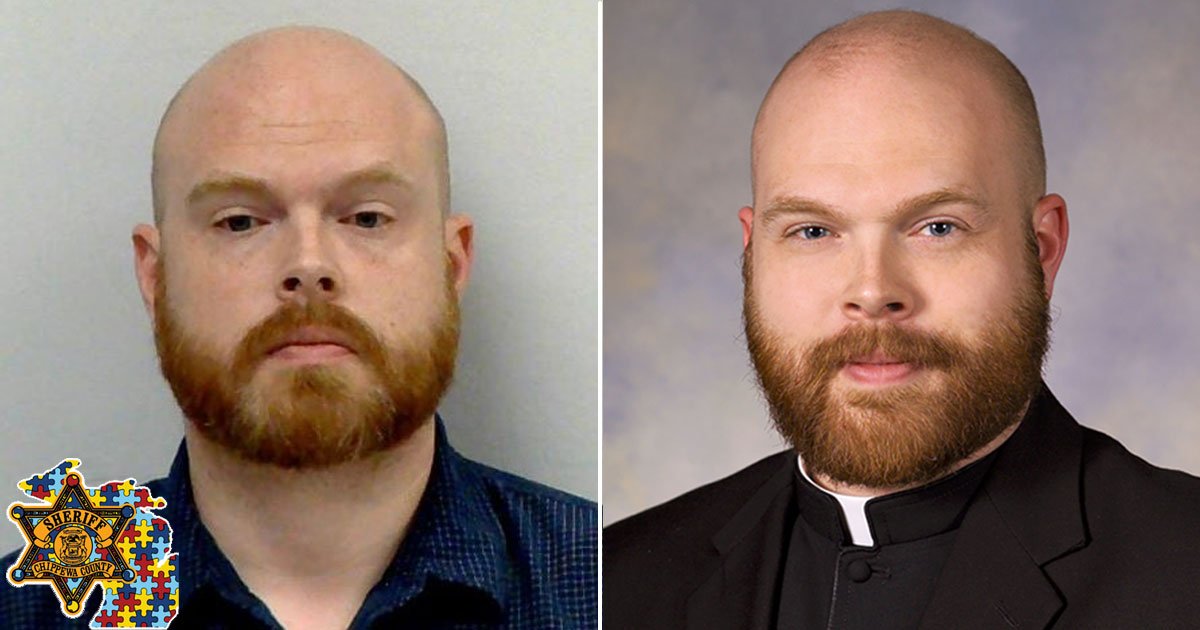 This report from ABC 10 News in Michigan:

Three men in Chippewa County were arrested over the weekend for human and sex trafficking crimes.

In just one day, three arrests were made.

Ben Simpkin, age 41, of Sault Ste Marie, worked in food service and was arrested for messaging a 15-year-old girl to coordinate meeting up to have sex. He was arrested at the motel where they were supposed to meet.

Aaron Nowicki, age 37, of Cheboygan, is a non-practicing Catholic priest. He was chatting with who he thought was a 15-year-old boy. He was also arrested at the motel where he believed they would meet up.

Micah Rickert, a 23–year–old college student thought he was messaging a 14-year-old boy. He was also arrested at a motel meet–up spot.

The diocese of Marquette posted this message in response to the arrest:

The Chippewa County Sheriff’s Department announced Monday evening, Aug. 16, 2021, that Aaron Nowicki, a priest of the Diocese of Marquette removed from ministry in 2019, has been arrested in connection with the “Ghost” operation concerning child trafficking.

Nowicki resigned and was removed from priestly ministry on Jan. 25, 2019 due to allegations of serious, but not criminal, sexual misconduct with a vulnerable adult. A canonical (Church law) process is underway regarding those allegations. The allegations were reported by the Diocese of Marquette to the Michigan Attorney General.

Following his ordination to the priesthood on June 3, 2016, Father Nowicki served as associate pastor of St. Peter Cathedral in Marquette and St. Mary Mission in Big Bay until his resignation in 2019.

To those who have been harmed by clergy sexual abuse, Bishop John Doerfler said, “On behalf of the Church, I apologize to all those who have been harmed by any bishop, priest or deacon, and renew my commitment to reach out and bring Christ’s peace and healing. There is no excuse for what happened to you. You are in my thoughts and prayers, and I am willing to journey with you to find Christ’s peace and healing.”

Bishop Doerfler encourages anyone with a report of abuse regarding the diocese to contact Michigan’s Attorney General. The Michigan Attorney General’s Office can be contacted at its toll-free reporting hotline at (844) 324-3374 (Monday through Friday, 8 a.m. to 5 p.m.) or by email at aginvestigations@michigan.gov.

The diocese’s Victims Assistance Coordinators are also available to help those harmed receive pastoral care leading toward healing. To bring a complaint regarding the sexual abuse of minors to the attention of the diocese, call one of the victims’ assistance coordinators: Stephen Lynott at (844) 495-4330 or Diane Tryan at (844) 694-4362.

Those who wish to put their complaint in writing may direct their correspondence to: Victims Assistance Coordinator, c/o Catholic Social Services of the U.P., 1100 Ludington St., Suite 401, Escanaba, MI 49829. The letter should be marked “personal and confidential” and indicate whether a response is desired by phone or by letter.

The diocese will also help anyone bring their concerns to Church officials outside the diocese if the sexual abuse occurred elsewhere and the person now resides in the Diocese of Marquette. If you are unsure about bringing a complaint or would like further information, Stephen Lynott or Diane Tryan may be contacted at the numbers above.