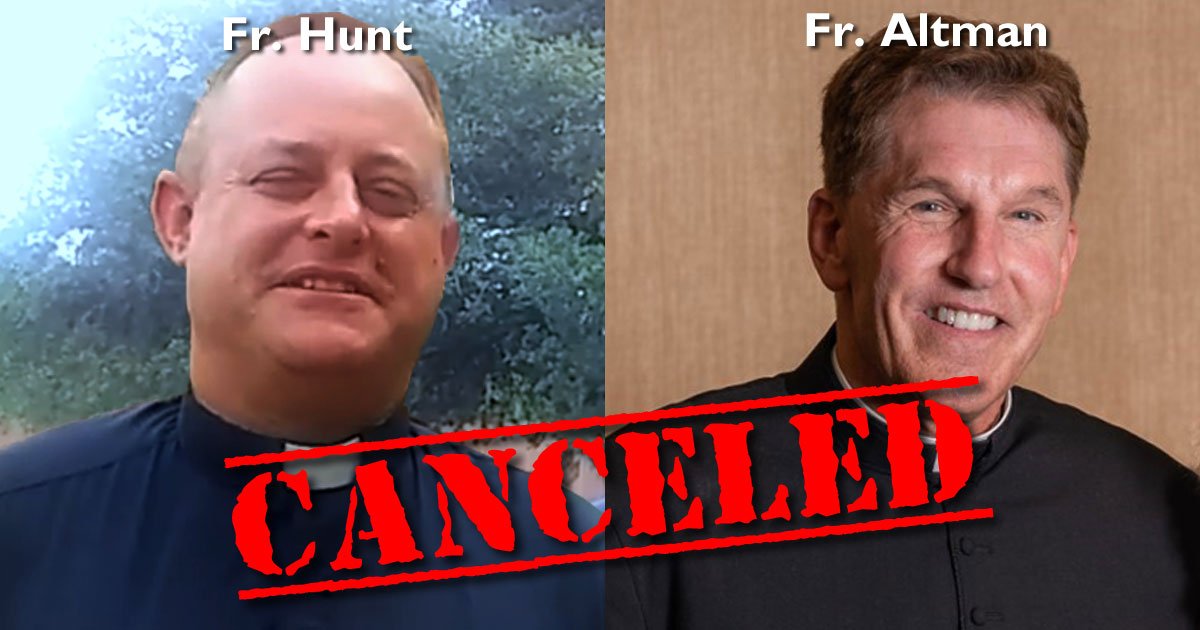 The recent punishments imposed on Fathers James Altman and Clay Hunt by their ordinaries reflects the continued unjust behavior of ordinaries throughout this country who disdain due process and impose penalties without a fair hearing.

Yet, too often, and with alarming frequency, superiors desire a servile fear instead of obedience based on fatherly love and fraternal charity.

This, sadly, parallels the culture which seeks to shut down positive dialog and negatively cancels any voice which pricks the conscience of the sinner. A term, not of derision, but rather a word which applies to every human being.

Worse still, the heavy-handed treatment of faithful priests, sons of the Church, who show any zeal or boldness, reflects a demonic imposition of silence upon the voice of Christ, and makes a mockery of the prophetic voice of the Church in the world.

Bishops would do well to listen to the words of the “The Decree Concerning the Pastoral Office of Bishops in the Church,” Christus Dominus, from the Second Vatican Council.

Bishops should always embrace priests with a special love since the latter to the best of their ability assume the bishops’ anxieties and carry them on day by day so zealously. They should regard the priests as sons and friends and be ready to listen to them. Through their trusting familiarity with their priests they should strive to promote the whole pastoral work of the entire diocese.

They should be solicitous for the spiritual, intellectual and material welfare of the priests so that the latter can live holy and pious lives and fulfill their ministry faithfully and fruitfully.

Disagreement on prudential matters is not disobedience. Politics is not theology. Injustice does not substitute for solicitude for the welfare of a son and brother.

Most of all, political correctness is a risible substitute for piety and holiness.

The above section from Vatican II concludes:

With active mercy bishops should pursue priests who are involved in any danger or who have failed in certain respects.

Mercy is not opposed to justice. Moreover, mercy does not arise from injustice.

It is a dangerous failure on the part of too many ordained Catholic ministers who have embraced the world, the flesh, and the devil in order to appease “itching ears,” and who have decided the “season” for preaching the full Gospel of Jesus Christ and the Universal Truths of the One Catholic Faith has come and gone.

We implore all bishops, as our fathers and brothers in Christ, to heed the voice of Christ and His Church: “Repent!”

We condemn the continued worldliness and injustice used to suppress the voice of Christ which is reflected in the heavy-handed and harsh treatment of our brother priests: “Repent!”