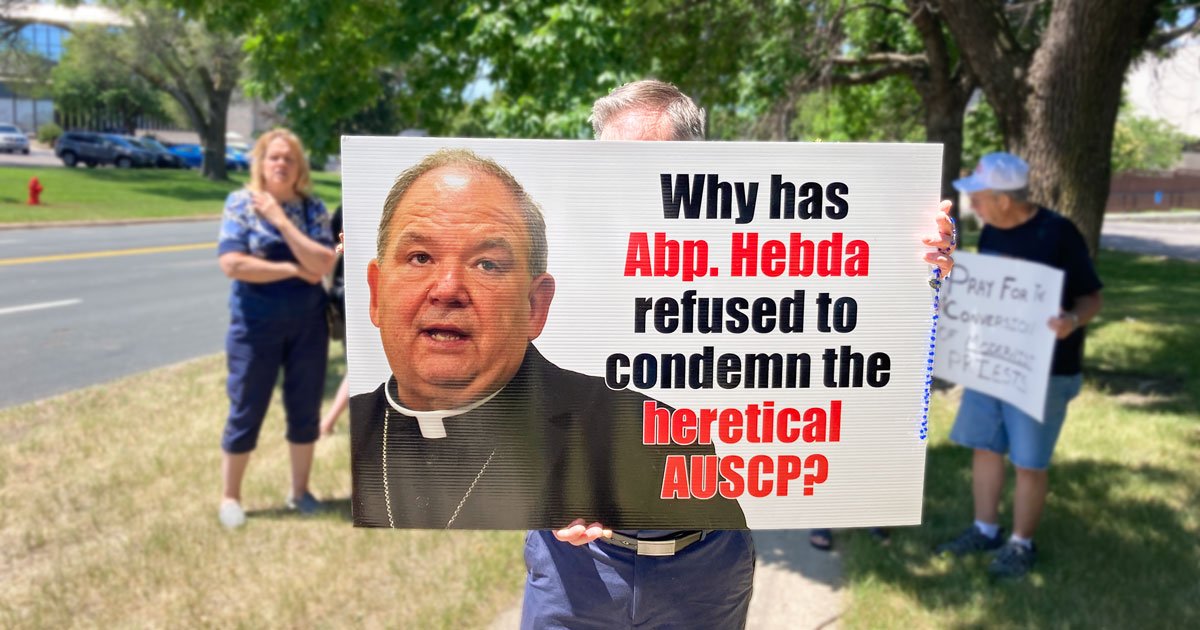 A “Rosary of Reparation” rally, sponsored by the Lepanto Institute and Catholic Parents Online, was held on June 22 and 23 in front of the DoubleTree Hotel South in Bloomington, MN, in protest of the 2021 Annual Assembly of the Association of U.S. Catholic Priests (AUSCP).  The Rosary rally was conducted in response to the AUSCP’s support for theologically and morally condemned positions such as women’s ordination and the blessing of same-sex unions.

Before organizing the rally, Lepanto Institute president, Michael Hichborn wrote a letter to Archbishop Bernard Hebda explaining the serious issues with the AUSCP, asking him to condemn the organization and forbid his priests from having anything to do with it.

In his brief response to Hichborn, Abp. Hebda failed to condemn the gathering as requested, writing:

“Perhaps Abp. Hebda missed this fact, but at least one of his priests will be participating in the AUSCP assembly,” said Hichborn.  “Not only is Fr. Michael Joncas, a priest of the Archdiocese of Minneapolis, scheduled to speak at the AUSCP assembly, but he is actually a member of the AUSCP itself.”

“The AUSCP poses a clear and present danger to the Catholic Faith in the United States, and it is receiving cover and support from cardinals and bishops,” said Hichborn.

Archbishop John Wester of Santa Fe, NM, is the liaison from the United States Conference of Catholic Bishops (USCCB) to the AUSCP, and Bishop John Stowe of Lexington, KY is a member.  Other cardinals and bishops promoting and supporting the AUSCP include Cdl. Cupich, Cdl. Gregory, Abp. Carlson, Bp. McElroy, and Bp. Hartmayer.  This year, retired Bp. Richard Pates and Bp. William Wack will also be participating.

Some bishops, however, have spoken out against the AUSCP.  Last year, Bp. Daniel Thomas of the Diocese of Toledo (where the AUSCP is headquartered) issued a letter to his diocese, warning that any association with the AUSCP “may be a source of grave concern due to the confusion and scandal they have caused.”

“We’re calling on bishops throughout the country to formally condemn the AUSCP and forbid their priests from being members,” said Hichborn.

A collection of the serious concerns with the AUSCP can be found at www.lepantoin.org/auscpinfo