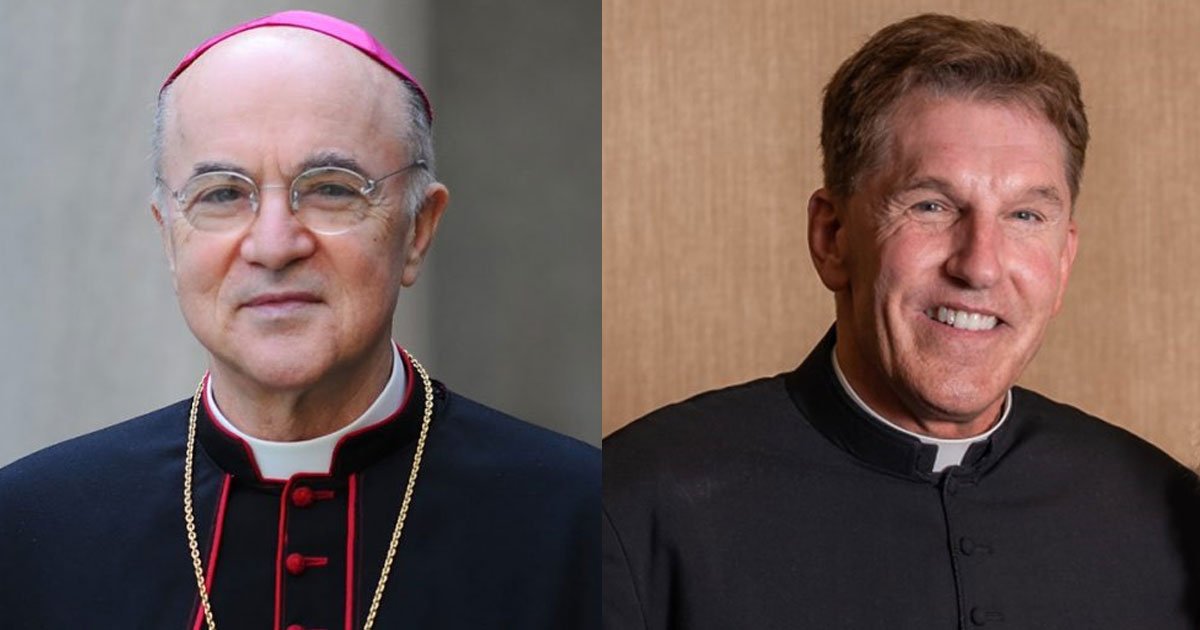 The former Papal Nuncio to the United States and Vatican Whistleblower, Archbishop Carlo Maria Viganò released the following letter of support to faithful Catholic priests who have been persecuted without cause by their Bishops. The surprise communication from the beloved prelate was read during a massive fundraising event of over 1000 people at the Carlisle Banquet in Lombard, Illinois on Thursday, June 24, 2021. Archbishop Viganò’s remarks appear below:

It is with extreme satisfaction that I have heard the news of the praiseworthy initiative in which you are involved, together with Reverend Father James Altman, in the defense of priests persecuted by their superiors due to their fidelity to the immutable Magisterium of the Church and the venerable Apostolic Liturgy.

I can only wholeheartedly encourage you and your collaborators for this project, which I hope finds generous support among many faithful laity and perhaps some good Brothers among the clergy. In this hour of grave deviations in the Hierarchy, the commitment of lay people is essential and very important: it concretizes the prophetic words of the Venerable Archbishop Fulton Sheen, who in speaking of the End Times recalled how the salvation of the Holy Church would be achieved – besides, of course, through the intercession of the Mater Ecclesiae before the Throne of Her Divine Son – by the courageous contribution of the laity.

During these times of apostasy, in which the de facto schism of the rebellious German pastors and many others in the world not only is not punished but even appears almost to be encouraged by the mercenaries who occupy the highest levels of the Church, it is a great consolation to witness this awakening of those who are good, who are ready to assist the material needs of persecuted priests and support them with prayer and tangible gestures of that Charity which always, in the course of history, has given unequivocal proof of the newness of the Gospel.

Let us not forget that, if there was once a time in which the Sacred Ministers were respected for their conduct of life and for the example which they offered to the world, Satan never gave up unleashing his hatred against those whom he fears the most among men, because it is thanks to priests that the Divine Sacrifice which decreed the defeat of the Enemy of the human race is renewed in an unbloody form on our altars.

Our Lord, the Eternal High Priest, calls his Sacred Ministers blessed when he says: “Blessed are you when they insult you and persecute you, and utter every kind of evil against you falsely because of me. Rejoice and be glad, for your reward is great in heaven. Thus have they persecuted the prophets before you” (Mt 5:1-12). Persecution is thus a manifestation of the sacrificial nature of the Priesthood, following the example of Christ: he who offers the sacrifice must also be a victim at the same time, an oblation to the Divine Majesty. It is grievous that today we must number among the persecutors not only the enemies of God who are far from the Church but even those whom the Lord has placed as Shepherds to guard His Flock. We can tremble at the thought of the punishment that awaits them, which will be all the more severe in proportion to the level of responsibility of those who, placed in authority in the name of Christ, rage with cruelty on the innocent and show scandalous connivance with the guilty.

I permit myself to exhort all of you, dear lay faithful, not only to commit yourselves with renewed zeal in this true corporal and spiritual work of mercy towards good priests, but also to pray and offer penance and sacrifices for the conversion of the evil Shepherds and of those who, abusing their authority, persecute those who do good and preach the Catholic truth opportune importune [in season and out season – 2 Tm 4:2]. The return of so many who have strayed from the Flock of Christ, their change of heart, and the awareness of the betrayal committed against the Lord and His Holy Church will be the greatest victory that we can hope for, and which we confidently beg the Most Holy Virgin, Mother of Priests, to grant us.

I invoke the Lord’s greatest blessing upon all of you, and in a particular way upon our beloved priests who have been ostracized, derided, estranged from their communities, struck by illegitimate sanctions, and whose reputations have been injured. Know that you all have a special place in my prayers and in my priestly heart.