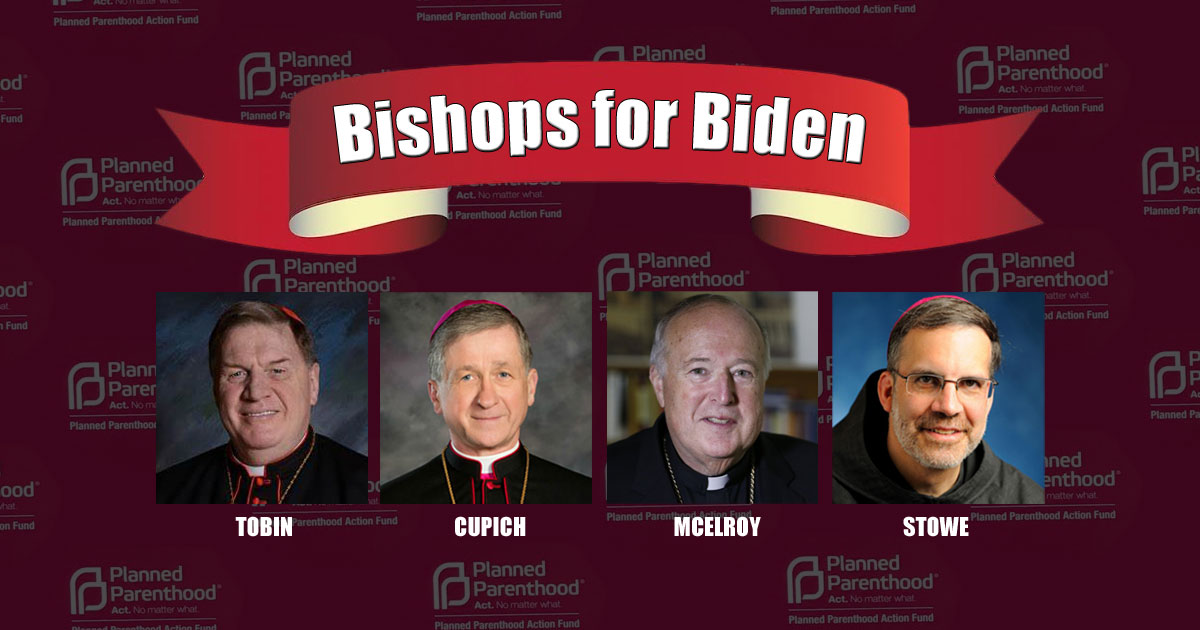 With so many “conservatives” and fainting-couch Christians tripping over themselves to shine the shoes of Joe Biden and Kamala Harris, I’ve decided to launch a contest. The prize in contention? The coveted title of “Worst Person in America.”

I’m not sure when we’ll hold the pageant. Ideally it should take place after Biden has pardoned rogue abortionist Kermit Gosnell . . . but before Biden sends him to Rome as U.S. ambassador to the Vatican. Then we have our “dream” host. (Note to self: Can Kermit sing? Must contact his agent.)

Competition will be fierce. And none of the squalid celebrities I just named would even make the first round of contestants. Because there’s an old, wise saying: “The corruption of the Best becomes the Worst.”

As Christians, we rightly expect the best from Christ’s apostles, our leaders. As a Catholic, I believe that refers to the heirs of the Apostles, our church’s bishops. These men dare to walk in the shoes of Peter, John, and James. They publicly claim the authority to teach the Church’s doctrine and bind the believers whom (in the spiritual realm) they rule. They demand our obedience, our deference, and our tithes.

The Floor of Hell

You see where I’m going with this. Surely for a Christian, wicked church leaders ought to score much worse than … surly employees at the DMV or lazy, repetitive writers for Saturday Night Live. Not even presidents or Supreme Court justices rate so high a standard. Likewise, bad printing and typos in a Bible are something much worse than in the instructions for your laser printer. (The most infamous typo in history produced thousands of copies of the so-called “Adulterer’s Bible,” which read “Thou shalt commit adultery.”) Church Father St. John Chrysostom quipped that the floor of hell is “paved with the skulls of bishops.”

Non-Catholics don’t get to sit back and smile. Instead they should take a moment to think of which leaders in their denominations are right now scrambling to find common ground with the Biden regime. Or at least to throw under the bus some other Christians who fought Biden “too fervently.”

I will stay in my lane, and nominate leaders of my own church who might someday blush and blubber as Griffin crowns them before masked, cheering crowds of BLM thugs and Twitter execs.

There are a few good bishops in the United States. Few enough that I could have them all over for dinner to compete with the beagles for Bubba’s chicken strips. And there’d still be room to squeeze in James Robison and Franklin Graham.

But the vast, vast majority are gray men, small men. They’re men who seemed bland and harmless to the kingmaker in the U.S. church for decades, defrocked pedophile Ted McCarrick. A couple of good ones slipped through his filter. And the rest? Too many have greeted the rise to power of abortion fanatic Joe “President” Biden with the same giddy glee as a gaggle of drag queens getting a surprise visit from Judy Garland.

The Church of Bricks and Mortar

All this is happening because there are always two competing principles at work in the Church. Some men are guided first by the desire to preach the Gospel. Others seek first to pile up more bricks and mortar, cover up their fellow clerics’ crimes, and amass institutional power. The latter group in the Catholic Church in the ‘60s adopted one other priority: creating lots of cushy jobs in the priesthood for slothful gay men like themselves.

That entailed, of course, freezing out “rigid” men who might blow the whistle with Rome. In particular, these worldlings needed to block the rise of bishops who actually believed each line in the Creed. (Including the parts that Nancy Pelosi and Joe Biden sneer at.) So the bishops’ sorority nominated to Rome more ciphers like themselves. That’s how we ended up with so many hierarchs who lacked the IQs to scheme for the Democratic National Committee, or the talent to dance on Broadway. But at least they finally get to live in palaces, like the Disney princesses that they always knew they were.

A Hierarchy Without Leaders

Now Rome doesn’t care of course, with Pope Francis suiting up as the chaplain for the Great Reset, and the prophet of globalism. So there’s hardly any fig leaf left to spare our sensibilities. Just Francis grinning with Bill Gates, George Soros, and Chinese President Xi. Every Catholic on earth now faces the same situation I do. Technically I’m a member of a hierarchical church, bound to defer to the pope (and the bishops he picks) on matters of doctrine. But I can’t in good conscience do that, since he preaches heresy, and allies himself with abortionists and the Chinese Communist government.

So I’m in the same position as any Protestant, following my conscience in the absence of any trustworthy earthly teachers. The only difference? In addition to Scripture, I have past papal statements by popes who believed in God to which I can look for guidance. But that’s some pretty cold comfort.

Let’s leave such dark thoughts aside, and get back to our pageant. I’ve had to spend long hours winnowing down the candidates for the coveted prize in contention. For decades, the U.S. bishops have issued 200-plus political demands each year, acting like a legitimate government in exile. A slim percentage (10-20 percent) referred to the sanctity of life, religious liberty, or some other fitting issue that actually fell within their authority.

The rest were typically calls for ever more taxpayer money to be squeezed out of the citizenry and handed to the government. Then much of it sluiced through the church’s non-profits, which yield from federal contracts some 40 percent (and rising) of the bishops’ annual budgets. Or else more rights (to own guns, for instance) to be stripped from citizens, amassing more might for Leviathan.

They Had One Job

Maybe they were too busy telling us how to run the country. Because those same bishops covered up and bungled a decades-long crisis of recidivist sex abusers among the priesthood. The one job they had, governing the church, bubbled on some back burner until it caught fire. The bishops waved it off, exempted themselves from punishment, and kept on engaging in old-time Irish machine politics.

As the bishops told the citizens how many immigrants to accept and which weapons the Army should use, they played a shell game with parents whose kids had been molested, swapping priests who abused teenage boys from one parish to another. In that same period, four American Catholics out of ten left the church, not to return. Catholic numbers are padded by recent, massive arrivals from Latin America. But millions of those people left too. For the first time in history, Catholics don’t make up a majority of Latinos in the United States.

So it hasn’t been easy picking the most … “exceptional” bishops. But I’ve narrowed the candidates down to three, out of many worthy contenders. Let me briefly list their achievements, with ample links to illustrate.

Continue reading at American Greatness to find out the winner