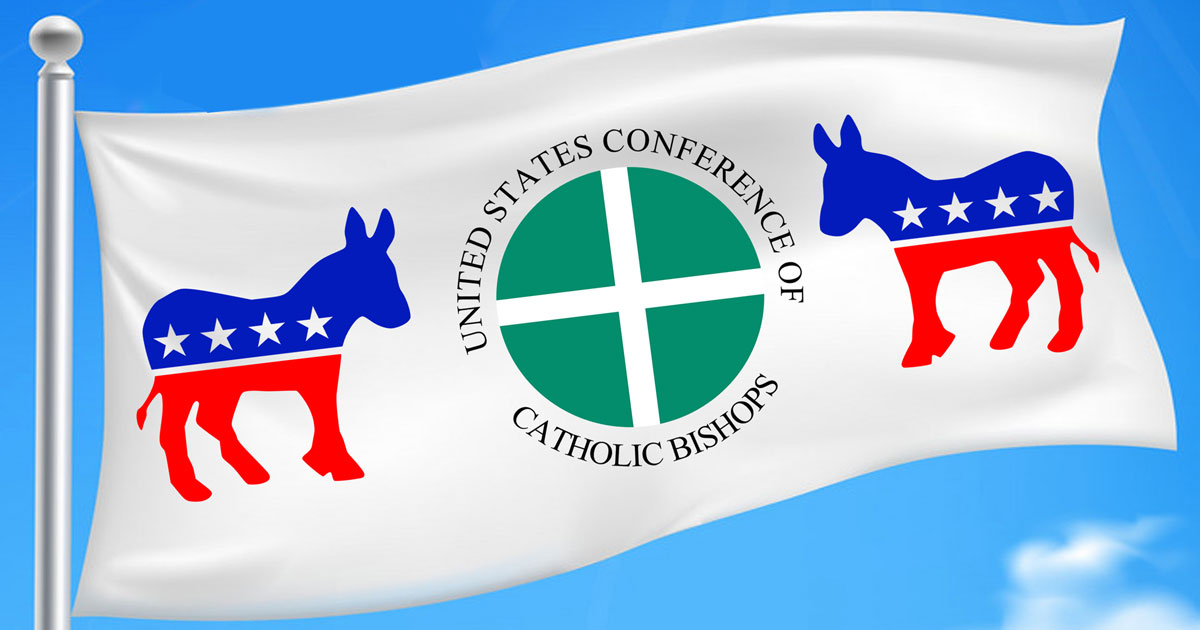 Michael Hichborn’s weekly newsletter makes it appear the United States Conference of Catholic Bishops operates as a tool of the Democrat party.

Former vice-president and current Democrat candidate Joseph Biden is the most radically pro-abortion, pro-LGBT, anti-Catholic who claims to be “Catholic” candidate ever to hit the national stage.  Four days ago, the heretical rag known as the National Catholic Reporter published an article announcing the co-chairs of the Catholics for Biden initiative.  Most notable on the list is the former CEO of Catholic Relief Services, Dr. Carolyn Woo.

Dr. Woo resigned from her position in 2016, but while she was with CRS there were many, MANY red flags about her disposition.  Despite my complaints to the few good bishops I regularly communicated with about CRS, Dr. Woo enjoyed a reputation as being “very pro-life.”  When I met with her in November of 2012, she made excuses as to why CRS partnered with abortion-providing organizations, and ever after, defended CRS’s memberships in pro-abortion organizations, their same-sex “married” vice-president, and a host of other issues I reported about CRS.  After stepping down, Woo became involved with the heretical organization called FutureChurch, and now, she’s shilling for Joe Biden.  Worth noting is that in 2016 I conducted a survey of open records regarding donations to political candidates by employees of Catholic Relief Services.  According to all available records, 98% of CRS employees donated to pro-abortion candidates.

But people from Catholic Relief Services aren’t the only ones supporting the apostate Joe Biden.  Just yesterday, former USCCB director for the Department of Justice, Peace and Human Development John Carr wrote an article for America Magazine titled, “I helped write the bishops’ first document on Catholics and voting. Here’s why I’m voting Biden, not Trump.”  Carr, in his usual “middle of the road” style, meanders through the “issues,” and despite recognizing that Trump has done more for the cause of life than any previous president, and that Biden is deeply committed to the corporate murder of preborn children, he elevates perceptions related to race, immigration and the environment above the protection of children, the nature of marriage, and the free and open practice of our Catholic faith.  But this comes as no surprise at all.  I’ve known Carr for 10 years, having met with him on a number of occasions regarding funds from the Catholic Campaign for Human Development going to pro-abortion, pro-LGBT, Marxist organizations.  Carr defended grants going to groups that were actively fighting against Church teaching and even once offered me a bribe to not report on the CCHD.  But Carr’s history of quietly supporting pro-abortion causes goes all the way back to his work in the Carter administration as the executive director for the White House Conference on Families.  As the executive director, with his name on the final recommendations, Carr handed Congress a host of suggestions for “improving the condition of families,” which included expanded access to abortion and contraception.

Under Carr at the USCCB was his head of the Catholic Campaign for Human Development, Ralph McCloud.  While Ralph hasn’t specifically come out for Biden,  he helped launch the political career of radical pro-abort Wendy Davis by giving her a ringing endorsement and agreeing to be her campaign treasurer.  In 2008, the very same year he was listed as Davis’ treasurer, McCloud gave a speech at a conference called “Realizing the Promise,” which was a reference to Barack Obama’s promise to Alinsky organizing groups.  In this speech, he called it a “great day,” and one which would see a “New Jerusalem” with “justice flowing through the streets like water,” and the “lion would lie down with the lamb” because Obama was now president. McCloud is still the head of the CCHD, and he is still giving funding to organizations diametrically opposed to Catholic moral teaching.

Earlier this week, Cardinal Joseph Tobin, who has authority over a radio station in his diocese that is broadcasting blatantly satanic music, said that a Catholic could “in good conscience vote for Joe Biden,” while also saying that he would “have a harder time” voting for Trump.

And while the social justice money machine of the US Catholic bishops is throwing its weight behind Biden and his anti-life crusade, faithful priests who dare to speak out against the luciferian agenda of the Left and the grave moral danger to souls who vote for it are being tossed under the bus.

Every major crisis in the Church, since the time Judas sold Our Lord for 30 pieces of silver, begins with a betrayal by priests and/or bishops.  Today is no different.  The USCCB as an entity has long betrayed the Church’s teachings on abortion, contraception, and homosexuality, and now … during an election where the moral lines have never been starker … the USCCB has finally ripped off the mask to reveal the demon behind it.

Earlier this week, we published a video report proving that the satanic radio station operating under the authority of the Archdiocese of Newark, WSOU, is indeed broadcasting violent and satanic music.  Just a couple of days later, heavy metal websites rushed to the defense of WSOU, with headlines like “Satanic” Metal Radio Station WSOU Under Fire from Catholic Protestors, and College Metal Station WSOU Deemed “Satanic” By Catholic Protestors, and New Jersey’s Best Metal Radio Station Is Under Fire From A Catholic Fundamentalist Group.  While that was going on, our video saw a spike in negative comments and “thumbs-down” reactions.  The irony is that many of the commenters defending WSOU proved our point that the station’s content was satanic and anti-Catholic by writing “hail satan” while advocating the gross immorality contained in the various songs we spotlighted.

Our campaign to get the station shut down is growing, but we need your help.  Fr. John Chadwick is both a professor at Seton Hall University (which owns the radio station) as well as the Vicar General for the Archdiocese of Newark.  Since the Archdiocese doesn’t provide ANY contact information for Cardinal Tobin, contacting Fr. Chadwick is the next best thing.  So, please call and email Fr. Chadwick.  Tell him that you’ve seen our video and that Seton Hall’s pathetic response is proved to be a lie, and demand that the radio station be shut down completely.  Fr. Chadwick’s phone number is 973-497-4003 and his email address is john.chadwick@shu.edu.

It’s very important that you both call and email Fr. Chadwick to ensure your message is heard.  And if you get a response, or speak to a live human being, please email me to let me know what transpired.

Some other headlines you may have missed:

As always, please pray for the Church, for our bishops, priests, deacons, and for Lepanto’s mission as we continue to unearth the truth and “restore all things to Christ.” (Col. 1:20)