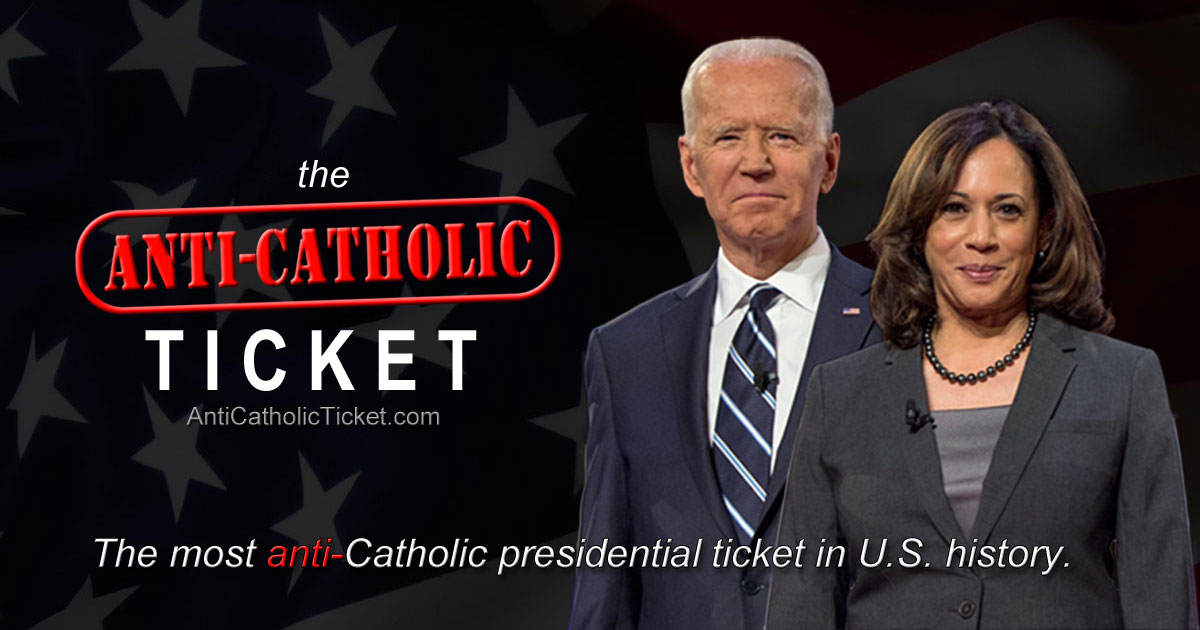 A group of lay Catholics called ‘Catholics for Truth’ has launched a campaign to educate Catholic voters on the fact that Joe Biden and Kamala Harris represent the most anti-Catholic presidential ticket in U.S. history.  The website for the new campaign is AntiCatholicTicket.com.

“Biden and Harris’ positions on non-negotiables for Catholics are the most radical ever held by U.S. presidential candidates,” said Michael Hichborn, spokesperson for the group.  “They are committed to fully funding with our tax dollars Planned Parenthood and keeping abortion legal up until the point of birth.  The U.S. bishops have identified abortion as their preeminent issue for the 2020 election. A vote for Biden-Harris is a vote for the murder of countless unborn babies.  Choosing to vote for Biden-Harris when there is a pro-life alternative on the ballot is a mortal sin.”

Hichborn went on to comment on Harris’ track record. “According to GovTrack, an independent organization that tracks U.S. lawmakers’ voting records and touts itself as ‘one of the oldest government transparency websites in the world,’ Kamala Harris was ranked as the most liberal member of the U.S. Senate in 2019,” said Hichborn.

Biden and his supporters have repeatedly touted his Catholic faith throughout the campaign. However, a number of priests and bishops have opined on Biden’s standing as a Catholic. “[I] don’t understand how Mr. Biden can claim to be a good and faithful Catholic as he denies so much of Church teaching, especially on the absolute child abuse and human rights violations of the most innocent, the not yet born,” wrote Bishop Richard Stika of Knoxville, Tennessee. Referring to Biden’s running mate Kamala Harris, Stika went on to write, “And he also praises his sidekick who has shown time and time again in senate hearings that she is an anti-Catholic bigot.”

Last week, Bishop Strickland endorsed a video by Fr. James Altman entitled ‘You Cannot be a Catholic and a Democrat.’ “As the Bishop of Tyler I endorse Fr Altman’s statement in this video. My shame is that it has taken me so long. Thank you Fr Altman for your COURAGE. If you love Jesus & His Church and this nation, please HEED THIS MESSAGE!” said Strickland.

“Biden and his supporters are clearly trying to confuse Catholics in this election,” stated Hichborn.  Our mission is to eliminate the confusion and educate Catholic voters that they cannot vote for the Biden-Harris ticket without putting their eternal salvation at risk.”