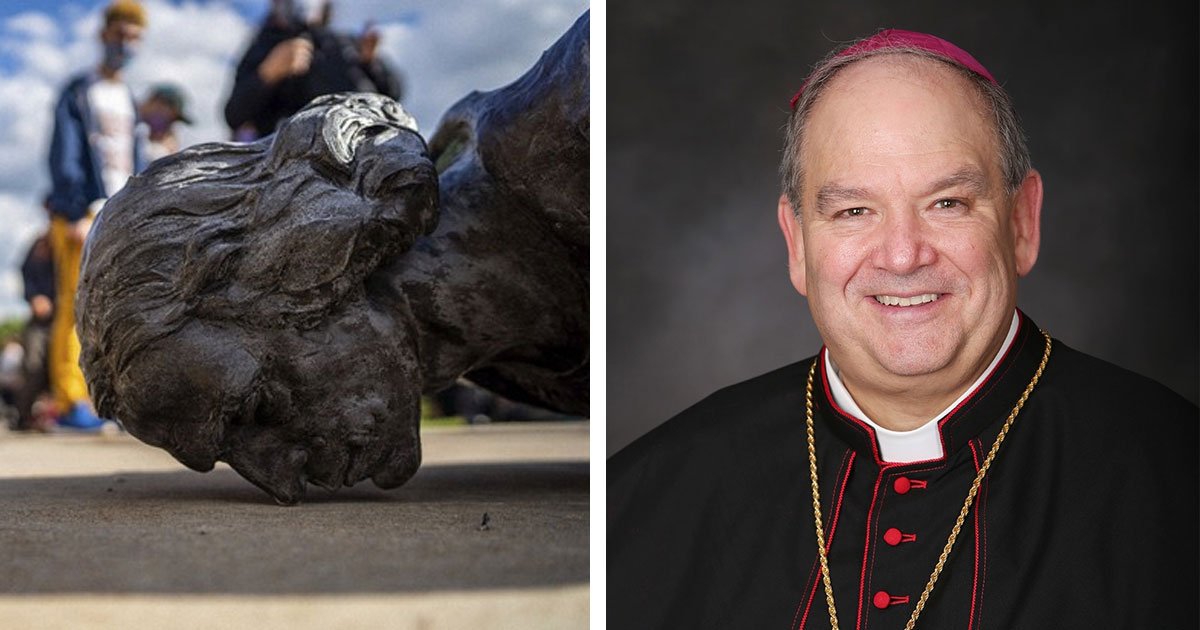 UPDATE: As of Wednesday, June 17, a full week after the incident, Archbishop Hebda has not issued any statement related to the toppling of the Christopher Columbus statue at the Minnesota State Capitol.

On Wednesday, members of the American Indian Movement (AIM) conducted a demonstration at the Minnesota State Capitol in which they toppled a statue of Christopher Columbus that had stood outside the Capitol since the 1930s.

The threat to the statue was no secret. The plan was posted on Facebook about 11 a.m. Wednesday morning stating that protesters would tear the statue down at 5 p.m.

Governor Tim Walz acknowledged AIM’s intent to destroy the monument hours before the statue was felled during a press conference. Nonetheless, the 10-foot bronze statue of the Catholic explorer was pulled down while members of the State Highway Patrol stood by and watched.

Christopher Columbus is considered to be a hero among many Americans. Regina Magazine did a profile on this iconic Catholic explorer last fall in which they pointed-out a number of notable facts:

The Minnesota State Capitol resides in the Archdiocese of St. Paul and Minneapolis. As of the time of this article, Archbishop Bernard Hebda had not issued a statement regarding the incident.

Imagine if this had been a plan to tear down of a statue of Martin Luther King by a group of white supremacists? Would Governor Walz have used force to stop protestors? How long do you think it would have taken Archbishop Hebda to issue a statement condemning the plan?

TAKE ACTION: Concerned Catholics should contact Archbishop Hebda and RESPECTFULLY encourage him to issue a statement condemning to toppling of the statue of Christopher Columbus.