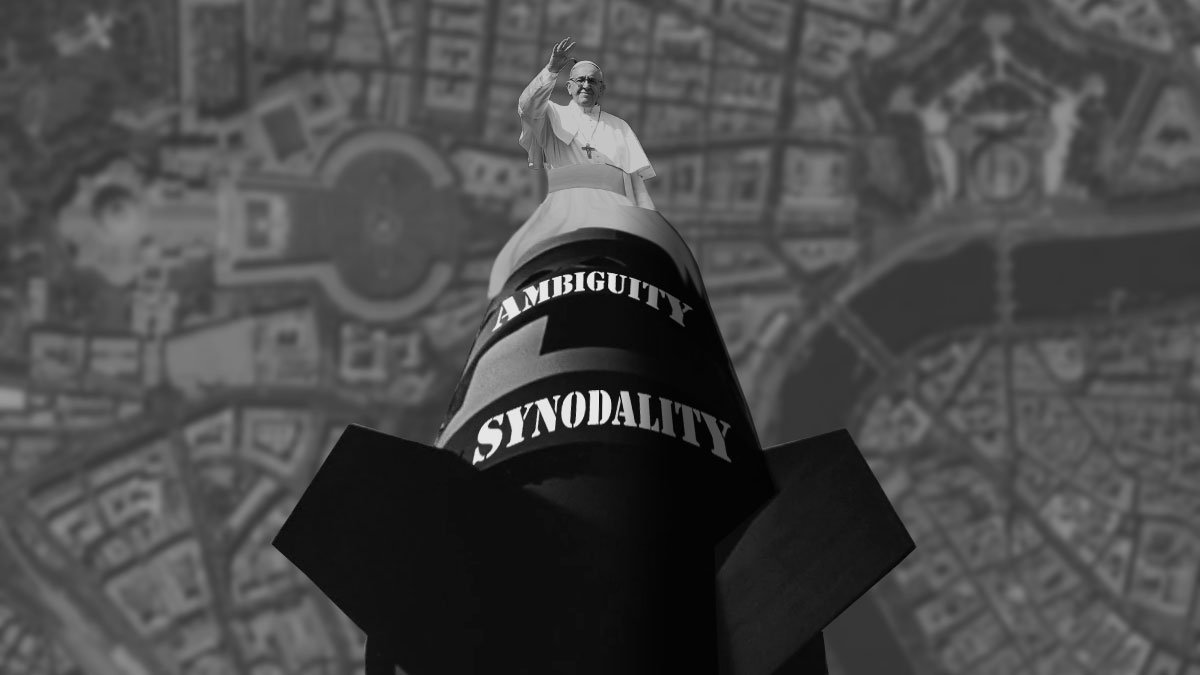 Pope Francis appears to have launched weapons designed to destroy the Roman Catholic Church. The weapons consists of ‘ambiguity‘ combined with ‘synodality.’

Catholics are beginning to witness the devastating carnage of these weapons in the recent declarations of the German bishops who have proclaimed homosexuality ‘normal’ and adultery as ‘not grave.’

The catalyst of this particular explosion stems from Pope Francis’ 2016 exhortation Amoris Laetitia, for which dubia Cardinals are still awaiting an answer from the pope nearly four years later.  And the recent Amazon Synod is getting ready to unleash even more ambiguity into the heart of the Church.

As George Wiegel pointed-out in his recent column on the Amazonian Synod, this masquerade model of ‘synodality’ was described in language sodden with clichés:

To walk together the Church today needs a conversion to the synodal experience. It is necessary to strengthen a culture of dialogue, reciprocal listening, spiritual discernment, consensus and communion to find spaces and modes of joint decision and respond to pastoral challenges. This will foster joint responsibility in the life of the Church in a spirit of service. It is urgent to work, propose, and assume the responsibilities to overcome clericalism and arbitrary impositions. Synodality is a constitutive dimension of the Church. You cannot be a Church without acknowledging an effective exercise of the sensus fidei of the entire People of God.

The Synods of 2014, 2015, 2018, and 2019 suggest that the ‘committee model’ deplored by Cardinal George has morphed into something arguably even worse: the masquerade model, in which a “synodal process” of “walking together” provides cover for effecting serious changes in Catholic self-understanding and practice for which there is little or no doctrinal, theological, or pastoral warrant.

In a 2018 interview with Raymond Arroyo, Msgr. Charles Pope referred to much of what was coming out of Rome a ‘weaponized ambiguity.’

Whatever the issue, whether its communion for the divorced/remarried, married priests, women deacons, or Pachamama idolatry, ‘weaponized ambiguity’ combined with ‘disguised synodality’ has created a dangerous Molotov cocktail setting the Roman Catholic Church upon the track to go the way of Luther’s Reformation, resulting in thousands of churches whose teachings can never be reconciled.

Christ promised that the gates of Hell would not prevail against the Church.  But that doesn’t mean that we are not in for a fight to defend His Bride.

Catholics need to put on the armor of God and prepare themselves for the battle to defend the eternal truths of the Catholic faith.

Please pray and fast for the Church and her leaders.