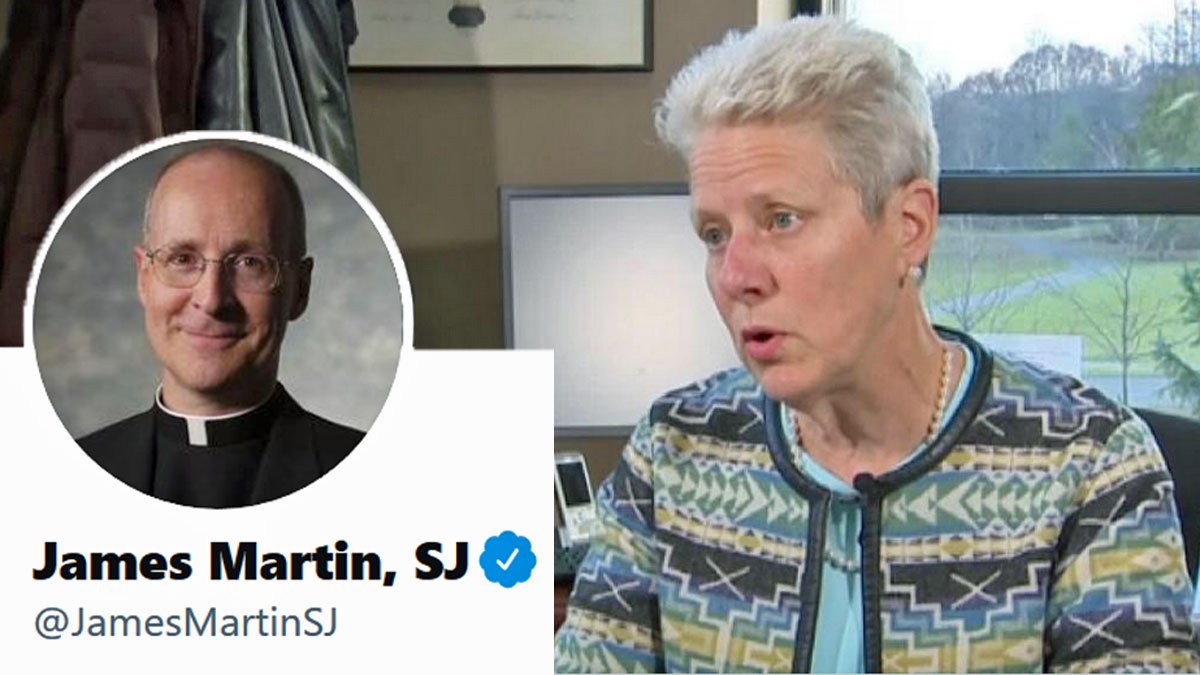 Fr. James Martin is a high-profile dissenter of Catholic teaching regarding human sexuality.  He recently posted a series of Twitter messages that we believe should result in his immediate denouncement by U.S. Bishops and having him barred from presenting in any dioceses in the nation.  Martin jumped on the bandwagon of LGBTQ+ advocates who are attacking a Michigan priest for withholding Holy Communion from a lesbian judge who is in a same-sex ‘marriage’ and refuses to repent for her sinful lifestyle.

Canon 915 says that those “obstinately persevering in manifest grave sin” are not to be admitted to Holy Communion. Canon 916 says Catholics in a state of mortal sin not to present themselves for Holy Communion.

The priest’s decision to withhold the Eucharist from this judge has been supported by his bishop.

Thread: Judge Smolenski, 62, was baptized at St. Stephen. She and her nine siblings attended the church’s school from first through eighth grade. Her parents were married in the church in the 1940s. That is, the judge has been a parishioner for 62 years. https://t.co/u7ygNzby9m

As with all these sad cases, the question is: Why are only married LGBT people being singled out? Is Communion denied to all parishioners who are not following church teachings? That is, married couples using birth control or IVF? Or young people engaging in pre-marital sex?

Moreover, why are parishes focusing only on issues of sexual morality? Are there no other issues in the moral life? Are those who refuse to pay a living wage to employees denied Communion? How about those who do not give to the poor? Those who do not care for the environment?

The argument is made that same-sex marriage is a “public” sin.” But there are many other examples of public acts well known among parish communities. Is Communion denied to someone who is cruel or abusive to a spouse, who doesn’t forgive coworkers, who holds a grudge for years?

Moreover, why is it only a “public” act that bars someone from receiving Communion? If pastors chose to, they could easily ask married couples if they are using birth control, or ask young people if they are engaging in pre-marital sex. Of course, they choose not to.

The answer is often: “Of course. Because it would be unethical to investigate and pry.” Yet in many of LGBT cases, the news of the person’s marriage comes from scouring Facebook pages, from someone else reporting them, or from a priest grilling friends and family members.

Investigation and prying seem to be acceptable when it comes to the lives of LGBT Catholics.

In his new podcast “Plague,” released today, on #WorldAIDSDay,” Michael O’Loughlin reminds us of how the Catholic Church ministered to LGBT people, but also how it targeted them for public opprobrium during the height of the crisis. Have we learned nothing?

The Catholic Church is called to proclaim church teaching. But church teaching is, at heart, Jesus’s message of love, mercy and forgiveness. The church also has rules. But these rules must be applied across the board, not selectively, and not simply to one group of people.

Otherwise it is no longer “church teaching.” It is merely discrimination.

Martin has a long history of “pushing the envelop” when it comes to Catholic Teaching regarding the approval of the disordered attractions of LGBTQ+ persons. A number of bishops, including Wilton Gregory and Blase Cupich, have even gone so far as inviting Martin into their dioceses to share his diabolical message. But Martin’s latest series of tweets raises his dissent to a whole new level and demands a response of our Bishops.