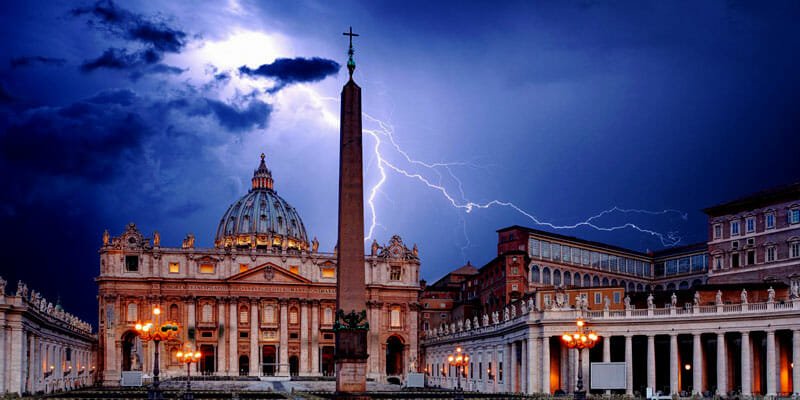 With the Vatican document for the Synod on the Amazon, the Bergoglian pontificate now has its official manifesto of the extreme left, based on “surreal socialism.”

In addition to Trump and Salvini, Brazilian President Bolsonaro is now among its enemies, all three of them emblems of the hated Western civilization of peoples of the Judeo-Christian tradition which does not deny its roots and identity.

This Vatican Instrumentum Laboris, writes José Antonio Ureta, “represents the total opening of the doors of the Magisterium to ‘Indian theology’ and to ‘eco-theology,’ two Latin American derivatives of liberation theology, whose cheerleaders, after the collapse of the Soviet Union and the failure of ‘real socialism,’ now attribute the historic role of revolutionary force to the indigenous peoples and to nature, in a Marxist key.””

Among Catholics there is confusion. It seems that the “Church that goes out” that Bergoglio wanted is truly going out — going out of Catholicism. Cardinal Walter Brandmüller — a personal friend of Benedict XVI — is a distinguished historian of the Church, and yet he has not hesitated to use the strongest terms to speak out against this Instrumentum Laboris: “heretical” and “apostate.”

Brandmüller speaks of the Synod as “an aggressive intrusion into the purely secular affairs of State and society in Brazil.” He then condemns the theological absurdities of the document (in contrast to the texts of the Second Vatican Council) and the “anti-rational rejection of ‘Western’ culture which emphasizes the importance of reason.” Such a Vatican Instrumentum, the cardinal thunders, “makes the synod of bishops and ultimately the Pope responsible for a grave violation of the depositum fidei, which has the consequence of the self-destruction of the Church or the changing of the Corpus Christi mysticum into a secular NGO with an ecological-social-psychological purpose.”

The prelate concludes “forcefully” that the Vatican document “contradicts the binding teaching of the Church on decisive points and thus it must be qualified as heretical. Given that here even the fact of divine revelation is called into question, or misunderstood, one must also speak, in addition, of apostasy.” This “constitutes an attack on the foundations of faith … and therefore must be rejected with the utmost firmness.”