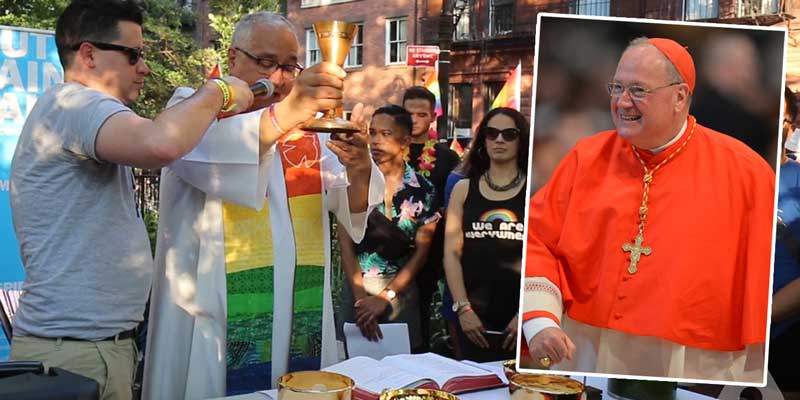 A Catholic priest wearing a rainbow stole celebrated a pro-homosexual “pride” Mass outside New York’s Stonewall Inn, a historic gay bar, in commemoration of the 50th anniversary of the riots against police that gave birth to the “gay rights” movement.

On the table that served as an altar, there was a bouquet of flowers that imitated the rainbow flag of the LGBTQ movement. On the fence that forms the perimeter of the park that has been designated a National Historic Landmark by the federal government, there were gay pride flags fluttering. Nearby, gay pride flags, clothing, and paraphernalia were available for purchase from street vendors.

A video of the event shows men kissing and taking photos of themselves in front of the famed tavern.

The June 27 Mass was celebrated by Father Gilbert Martinez, the former pastor St. Paul the Apostle parish, which has long had an LGBTQ-affirming ministry known as Out at St. Paul’s.

“Pride is a moment of grace,” the priest said during his homily. “Because after 50 years, a sea of change has come to this country… but there’s a long way to go still,” he added.

“Christ called us here today to this sacred space to commemorate the sacrifice of those who came before us,” Martinez said. “Fifty years ago queers, considered the lowliest of the low, made a stand for their dignity. And though they were beaten by police, they were not broken. Their hope, faith, and rage built the revolution of which we stand. Take a moment to pause and look around you, see their legacy in the faces of those around you. See what God is doing in our world.”

A request from LifeSiteNews for comment from Cardinal Timothy Dolan of the Archdiocese of New York went unanswered by close of business on Friday.

Read the rest at LifeSiteNews

This is at least the second ‘Gay Pride’ Mass celebrated by dissident priests in the Archdiocese of New York this year (the first was celebrated by Fr. James Martin). Cardinal Dolan has not condemned either of these outrageous events.