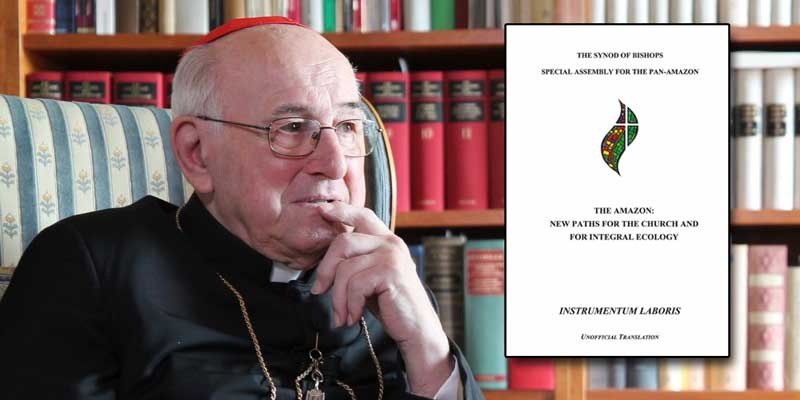 Cardinal Walter Brandmüller has issued a critique of the working document for the upcoming Amazonian Synod, saying “decisive points” are “heretical” and that it constitutes an “attack on the foundations of the faith.”

In a June 27 commentary the president emeritus of the Pontifical Committee for Historical Sciences also said the document “burdens” the Synod of Bishops with a “grave breach” of the deposit of faith which he believes will either result in the Church’s “self-destruction,” or reduce her to a “secular NGO with an ecological-social-psychological mandate.”

The German cardinal began his critique, published jointly at LifeSiteNews and Kathnet, by calling it “truly astonishing” that the synod, which takes place in Rome Oct. 6-27, deals exclusively with a region whose population is “just half that of Mexico City.”

He added this leads to “suspicion concerning the true intentions” of the synod, “which are to be implemented in a clandestine fashion.” He also questioned the “understanding of religion, of Christianity, and of the Church” given the basis of the working document, called an instrumentum laboris, published June 17.

Three-quarters of the lengthy text, he said, have “very little to do with the Gospels and the Church,” and he asserted it makes an “aggressive intrusion” into Brazil’s world and state affairs. “What do ecology, economy, and politics have to do with the mandate and mission of the Church?” he asked, and queried what “professional expertise” the synodal bishops have to make such statements.