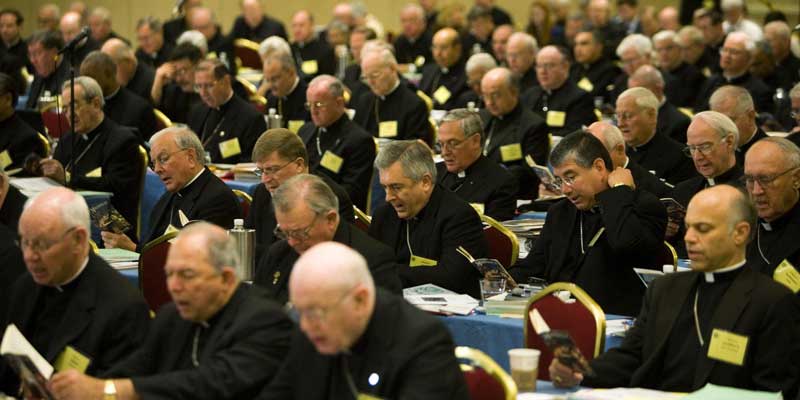 They’ve lost track of their mission to sanctify and are failing even in their attempt to be mere business administrators.

More than 200 men in black suits sit in a conference hall in a Baltimore hotel. On folding tables in front of them hundreds of pieces of paper are scattered and pitchers of water are placed at regular intervals. Two tables raised in the front are lined with people apparently in charge, each with a microphone. Everyone has a name tag, hung around his neck on a green lanyard. At a glance, you might think it’s a regional gathering of some professional association of paper salesmen, hotel managers, maybe even low-caliber lawyers. Only a careful look at their collars will show that these men are the apostolic shepherds, more or less, of the Catholic Church in the United States

One steps up to a portable podium and offers a brief opening prayer. There is a pull-down projector screen behind him lit up with an image of the crucified Christ; one can’t help but think that a better setting might have some permanent reminders of why these men are here — or permanent anything, for that matter. Folding tables, a moving podium, a temporary stage (though why a stage is necessary at all in a gathering of bishops is beyond me), all in a neutral (not to mention, thoroughly secular) location, every exit neatly marked by red-lit signs — the bishops look ready to pick up and run at the first hint of trouble. Call it a sign of the times.

A woman begins to bang out a hymn on one of those plug-in electric keyboards. Another impermanence tic. It’s turning into a compulsion, a reflex against that hideous horror, tradition —  or, worse, aesthetics. As the keyboard jumps and jolts along and the bishops sing (each out of tune in his own way), you can’t help but feel nostalgic for the grand organs that once made music worthy of the Church and for the simple, ancient chant that even Blase Cupich could sing without sounding like a character out of VeggieTales.

When morning prayer is ended, though not before one more grating hymn is scraped out, Cardinal Daniel DiNardo, president of the the United States Conference of Catholic Bishops, reminds them of the reason for this assembly: “To further the sacred work of rooting the evil of sexual abuse from our Church.”

That would be great. But it quickly becomes clear that combating evil is not their primary concern — or that, if it is, they have no idea how to do it. Forty-five minutes into the proceedings, the first substantial mention of the issue finally appears, as a chargé d’affaires from the office of the Holy See’s nuncio to the United States, reading a message from the nuncio himself, tells the bishops that “there can be no hesitation in responding vigorously as a matter of justice.” And therein lies the problem: for the bishops, everything is about responding.

Read the rest at National Review