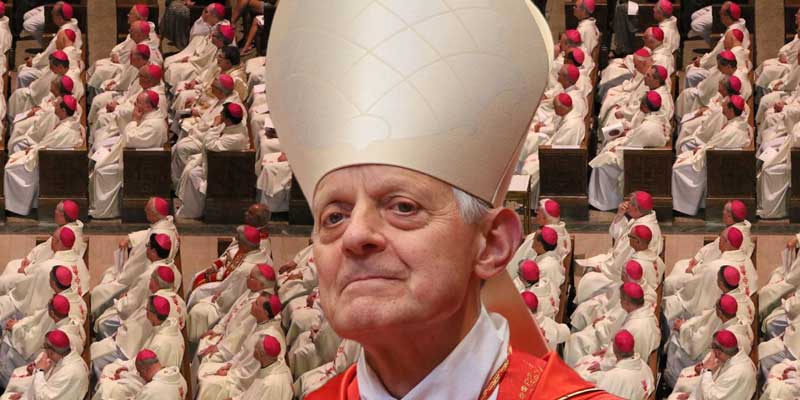 Will the U.S. bishops issue a formal censure of Cdl. Donald Wuerl for lying about his knowledge of Theodore McCarrick’s conduct and the restrictions imposed on him?

This is the question Church Militant posed to U.S. Conference of Catholic Bishops (USCCB) Public Affairs Director Judy Keane, as the bishops convened this week in Baltimore for their biannual meeting.

There are 441 active and retired Catholic bishops in the United States, and to date none have come forward to decry the blatant lies and cover-up of Cardinal Donald Wuerl regarding the corrupt and evil deeds of laicized Theodore McCarrick.

This organization exists in order to exist. No higher mission. God is an afterthought.Tweet

It’s been one year since Abp. Carlo Maria Viganò let loose the stunning revelations about the corruption and cover-up and how Pope Francis and Wuerl long knew of McCarrick’s abuse.

Monsignor Anthony Figueiredo’s recently published correspondence documents, which have been vetted for their authenticity by lawyers and journalists, corroborate Viganò’s letters and prove that Wuerl knew about penalties imposed on homosexual predator McCarrick.

Even after Figueiredo’s testimony, not a peep has been heard from the shepherds.

“In the face of Msgr. Figueiredo’s recent revelations, it’s absolutely staggering that not a single bishop in the U.S. has come forward to demand answers of Cdl. Wuerl,” said Michael Hichborn, president of The Lepanto Institute, in comments to Church Militant.

John Zmirak, senior editor of The Stream, told Church Militant, “This organization exists in order to exist. No higher mission. God is an afterthought.”

Speaking as a whole, the religion of the U.S. bishops is … the U.S. bishops. From their advocacy of de facto open borders — from which they profit, earning 40% of their 2018 income from federal contracts, largely to “serve” immigrants — to their silence on pro-abortion and infanticide Democratic politicians, the pattern is clear.

Indeed, patterns of corrupt and deceitful behavior, or what Zmirak calls “a comprehensive failure and moral disgrace,” are becoming easier to read. They can be read in the dwindling numbers of Mass attendees, decreased donations and tithes and the loss of faith in their Church.

“How can the laity be asked to have faith in their bishops if they won’t even hold each other to account in the face of such scandals?” Hichborn asked.