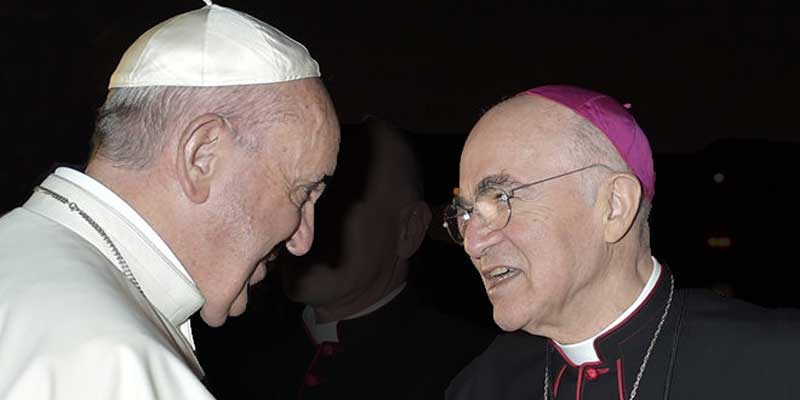 For what appears to be the first time, Pope Francis has openly denied that he knew anything of former Cardinal Theodore McCarrick’s immoral activities, directly contradicting Archbishop Carlo Maria Viganò’s account of their conversation on the subject.

“I didn’t know anything … nothing, nothing,” Pope Francis said in a new interview on Vatican News.

In response, the former apostolic nuncio to the United States has directly accused Pope Francis of lying.

In comments to LifeSite following the release of the interview, Archbishop Viganò said: “What the Pope said about not knowing anything is a lie. […] He pretends not to remember what I told him about McCarrick, and he pretends that it wasn’t him who asked me about McCarrick in the first place.”

Both interviews coincide with the release of a leaked correspondence between Pope Francis, Vatican Secretary of State Cardinal Pietro Parolin, and then-Cardinal Theodore McCarrick, confirming that restrictions were placed on McCarrick by the Vatican in 2008, and that the former cardinal (who has now been laicized over charges of sexual abuse) travelled extensively during the Francis pontificate, playing a key diplomatic role in establishing the controversial Vatican accord with Communist China.

In the May 28 interview with Mexican journalist Valentina Alazraki, Pope Francis sought to explain why he has never openly denied Archbishop Vigano’s original testimony, while issuing a denial seemingly for the first time.

Readers will recall that news of the former US nuncio’s testimony broke last August 25, while Pope Francis was attending the World Meeting Families in Dublin. One day later, during an inflight press conference on his return to Rome, the Pope sidestepped questions about the explosive allegations that he knew of former Cardinal Theodore McCarrick’s abuse.

“Read the [Viganò] statement carefully yourselves and make your own judgment. I am not going to say a word about this,” the Pope told journalists aboard the papal plane (see video here).

“You all have sufficient journalistic ability to draw conclusions,” he said.

“It is an act of trust,” the Holy Father added. “When a little time goes by, and you have drawn conclusions, perhaps I will speak about it, but I would like your professional maturity to do this work. It will do you all good, really.”

In today’s interview with Alazraki, the journalist and long-time friend of John Paul II candidly tells Pope Francis: “That silence has been very burdensome, because for the press and for many people, when one is silent it is like a husband and wife, isn’t it? You catch your husband and he doesn’t answer you. And you say, ‘There’s something rotten here.’”

“So why the silence?” Alazraki pointedly asks Pope Francis. “The time has come to answer that question we asked you on the plane.”

“Yes,” Pope Francis responds. “Those who studied Roman law say that silence is a way of speaking.”

The Viganò case: I saw it, I hadn’t read the whole letter. I saw a little and I already knew what it was, and I made a choice: I trust the honesty of journalists and I said to them, “Look, here you have everything. Study it and draw your conclusions.” And that’s what you did, because you did the work, that was great, and I was very careful to say things weren’t there but then, three or four months later, a judge in Milan said them when he was convicted.

“Of course,” the Pope responds. “I kept quiet, why should I make it worse. Let the journalists find out. And you found it, you found that whole world. It was a silence of trust towards you … And the result was good, it was better than if I had started to explain, to defend myself.”