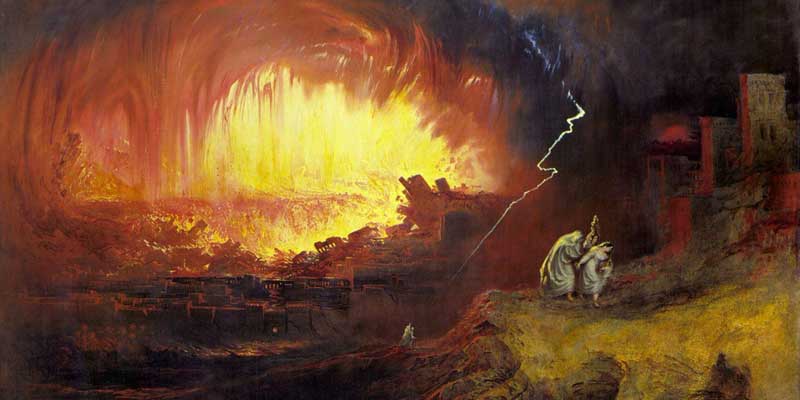 “As it was in the days of Noah, so it will be in the days of the Son of Man; they were eating and drinking, marrying and giving in marriage up to the day that Noah entered the ark, and the flood came and destroyed them all,” says Our Lord. “Similarly, as it was in the days of Lot: they were eating, drinking, buying, selling, planting, building; on the day when Lot left Sodom, fire and brimstone rained from the sky to destroy them all. So it will be on the day the Son of Man is revealed” (Luke 17:26-30). Notice that there is no mention of Gomorrah. In fact, in the whole course of Sacred Scripture, Gomorrah is never mentioned except in conjunction with Sodom, and then only some of the time. Perhaps we may thus surmise that the denizens of Gomorrah were even more astonished than the Sodomites and Noah’s neighbors at the terrible judgment that came upon them. It is easy to imagine them saying, “After all, this isn’t Sodom; we’re good people.”

To suggest that we are now, symbolically at least, inhabitants of Gomorrah is not to infer that we are on the brink of Our Lord’s Second Coming in Judgment, that it will happen while some of us are still living: he has already come, and everyone since has been, by definition, living in the final phase of human existence in this fallen world: “In times past, God spoke in partial and various ways to our ancestors through the prophets; in these last days [emphasis added], he spoke to us through a son, whom he made heir to all things and through whom he created the universe” (Heb. 1:1-2). As Peter Brown points out in his magisterial biography, “Augustine thought of himself as living in the Sixth, the last, the old Age of the World. He thought of this, not as a man living under the shadow of an imminent event; but rather, with the sadness of one for whom nothing new could happen.”