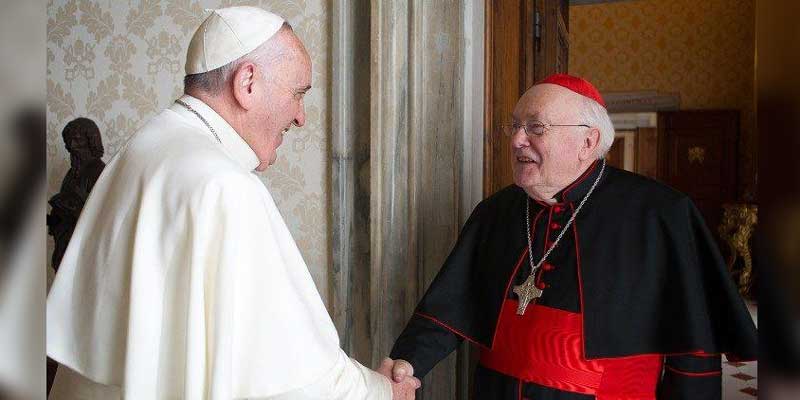 While some have suggested that pointing out errors of the Pope even when the faith is endangered is not permissible, the former head of the Vatican’s Congregation for the Doctrine of Faith, Cardinal Gerhard Mueller, told us: “The primacy of the Pope is being undermined by the sycophants and careerists at the papal court and not by those who counsel the Pope in a competent and responsible manner.”

Let’s start with the sign of the cross: In the name of the Father and the Son and the Holy Spirit. Amen.

Cardinal Godfried Danneels died on March 14 this year. We pray earnestly that God may have mercy on his soul. In truth he is very much in need of such prayers.

The Cardinal should have been one of the most controversial prelates in the Catholic Church, especially in our times, because he was caught on tape in 2010 telling a victim of pedophile sexual abuse by a bishop friend of his not to go public with the abuse. But Cardinal Danneels was in the limelight with Pope Francis.

At his death Pope Francis sent a telegram commenting on Cardinal Danneels saying:

This zealous pastor served the Church with dedication, not only in his diocese, but also at the national level as president of the Conference of Bishops of Belgium, while being a member of various Roman dicasteries. Attentive to the challenges of the contemporary Church, Cardinal Danneels also took an active role in various Synods of Bishops, including those of 2014 and 2015 on the family.

Those words of the Pope are very difficult to reconcile with Cardinal Danneels, since he opposed the Church’s teaching on homosexuality. You can see him here dressed in a so-called rainbow stole. In May 2013 the Cardinal expressed his support for homosexual unions to Dutch language newspaper De Tijd. He said: “I think it’s a positive development that states are free to open up civil marriage for gays if they want.” The French language paper L’Echo also quoted the cardinal saying that the French people should “obey the law” and not oppose “gay marriage.”