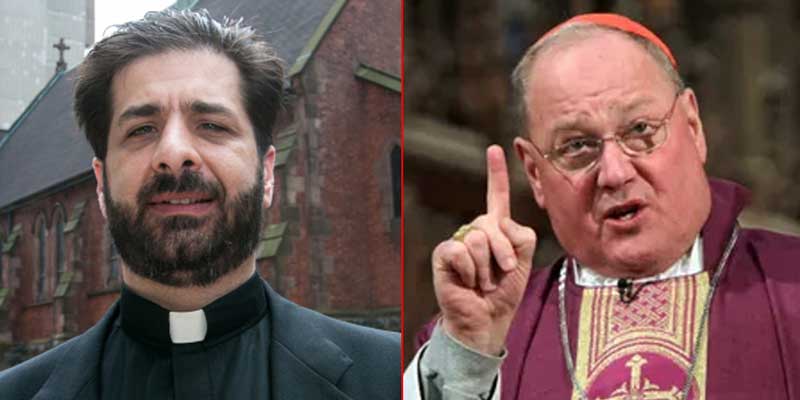 Cardinal Timothy Dolan is finally suspending a New York priest accused of embezzling hundreds of thousands of dollars to use on cocaine-laced parties with a gay-for-pay prostitute.

Father Peter Miqueli resigned in disgrace in 2016 after a lawsuit filed by his parishioners accused him of embezzling nearly $1 million dollars to use on drugs and to pay for the services of Keith Crist, a paid prostitute. Tatyana Gudin, former girlfriend of Crist, has confirmed that Crist had frequent paid sexual encounters with Miqueli that included $1,000 sexual trysts, $300 bottles of whiskey and the drug Dilaudid.

An announcement buried on page 16 of the diocesan paper “Catholic New York” announced the priest’s suspension, along with that of Fr. Michael J. O’Leary, arrested Mar. 17 for possession of methamphetamine.

“Both are prohibited from celebrating Mass and administering ‘any and all’ Church sacraments, either publicly or privately, and also face other associated restrictions,” the announcement read.

The decree of suspension was signed Mar. 19 by Cdl. Dolan. The announcement explained that Miqueli was in violation of a decree issued against him in 2016, when Dolan ordered that Miqueli “avoid and and all persons or situations that could endanger your obligation to perpetual continence or any and all conduct that could that might cause scandal to the faithful or that would receive publicity in the media … .”

The announcement does not specify the details of Miqueli’s violation. It also makes clear that Dolan is recommending that Miqueli seek voluntary laicization.