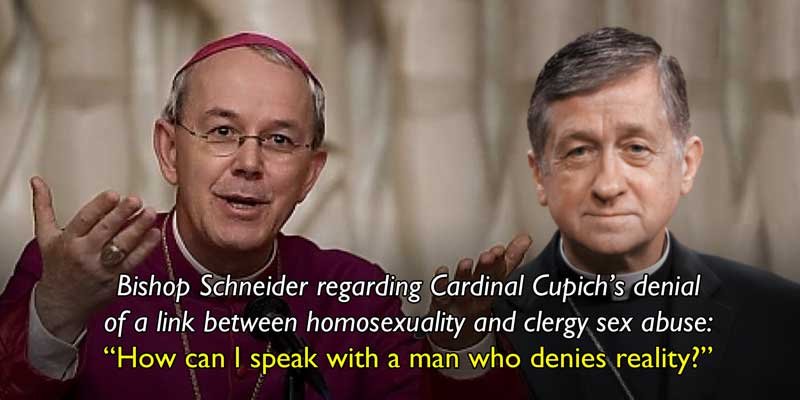 In their recent ad limina visit to Rome, the bishops of Kazakhstan and Central Asia raised a number of concerns which have been widely shared in the Church over the last several years, concerning perceived ambiguities in the magisterium of Pope Francis.

At the March 1 meeting, Bishop Athanasius Schneider, auxiliary of Astana, Kazakhstan, also obtained from Pope Francis a clarification that God only permits but does not positively will a “diversity of religions.”

In an exclusive interview with LifeSite, Bishop Schneider said the concerns raised during the two hour meeting with the Holy Father included “Communion for divorced and civilly ‘remarried’ Catholics, the issue of Communion for Protestant spouses in mixed marriages, and the issue of the practical spread of homosexuality in the Church.”

In a direct exchange between Pope Francis and Bishop Schneider, the claim that the “diversity of religions” is “willed by God” was also discussed. The expression, contained in a joint statement that Pope Francis signed last month with a Grand Imam in Abu Dhabi, has incited considerable controversy.

The Pope explicitly stated that Bishop Schneider could share the contents of their exchange on this point. “You can say that the phrase in question on the diversity of religions means the permissive will of God,” he told the assembled bishops, who come from predominantly Muslim regions.

The auxiliary of Astana in turn asked the Pope to officially clarify the statement in the Abu Dhabi document.

LifeSite sat down with Bishop Schneider in Rome following the ad limina visit. In a wide-ranging interview, we discussed his meeting with Pope Francis, his views on the recent Vatican sex abuse summit, and the anticipated attacks on clerical celibacy at the forthcoming Amazonian Synod.

Schneider branded the sex abuse summit a “clerical show” and a “failure” for not addressing the “deep roots” of the crisis and issuing “very precise, compelling and incisive norms.” He expounds on what he believes are the four causes of the abuse crisis and proposes two concrete norms he believes should have come out of the summit.

Asked about Cardinal Blase Cupich’s denial of a causal relationship between homosexuality and clerical sex abuse, Schneider asked despairingly: “How can I speak with a man who denies reality?”

In the interview, Bishop Schneider also praises the open letter issued by Cardinal Raymond Burke and Cardinal Walter Brandmüller ahead of the Vatican abuse summit and suggests further action that cardinals and bishops might take to address the current crisis in the Church.