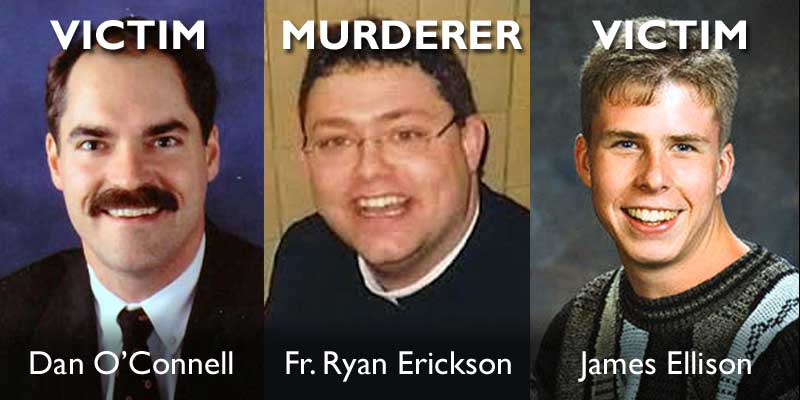 Those with experience in conducting investigations into cases of sexual abuse within the United States Catholic Church have found a what appears to be a reoccurring theme: in most cases, the perpetrator as well as those prelates who cover-up for them, seem to have little remorse for their victims. The primary concern seems to be concealing the offenses.  You can see this time-and-time again in the way that clerics have repeatedly denied responsibly for their actions and prelates have generally dismissed accusations when brought to their attention.

This typically has resulted in offenders being free to continue their abuse of other victims, and can even result in other crimes as well. Such is the case with the story of Dan O’Connell and James Ellison who were murdered by Fr. Ryan Erickson in Hudson, Wisconsin in 2002.  The following is an excerpt of an account of that story prepared in 2005 by the Doc Society.  They have graciously made this story available for re-publication here.

On February 5, 2002, Dan O’Connell, a 39 year-old civic leader, funeral director, and Catholic from Hudson,Wisconsin, had coffee with Mary Pagel, a bus driver for St.Patrick’s Catholic School. O’Connell asked Pagel, a fellow parishioner, if she had ever seen the assistant priest, Fr.Ryan Erickson, inappropriately touch children. He then told her that he was going to confront Fr. Erickson later that day. She advised against it. Undeterred, O’Connell replied, “I can handle it.”

Sometime between 1:00 p.m. and 1:30 p.m. that day, Dan O’Connell and a 22 year-old mortuary science intern, James Ellison, were killed at the O’Connell Family Funeral Home. Both men had been shot with a 9mm handgun. Two thousand people were interviewed by Hudson Police over the next several years, as they tried to solve the mystery behind the double slayings.

The Pagel connection was not made until the spring of 2005, after detectives Jeff Knopps and Shawn Pettee had been newly assigned to investigate the case. At the top of their cold and unimpressive list of leads and suspects to be re-interviewed, were a certain policeman trained in firearms, and the former assistant priest and youth pastor of St. Patrick’s Parish.

A recent report from North Dakota had come to their attention. Father Ryan Erickson, now a full pastor hundreds of miles away in another parish, had been accused of sexual abuse by a teenage male while at St. Patrick’s. Erickson had been transferred from St Patrick’s in Hudson in September 2003 to a parish in Ladysmith, Wisconsin, where the pastor asked Superior diocesan officials to “transfer either Erickson or me.”

The diocese elevated Erickson to be a pastor on his own at the Church of St. Mary of the Seven Dolors (Sorrows) in Hurley,Wisconsin. On November 11,2004, the detectives, not as impressed with Erickson as the diocese, interviewed him in person for several hours. They made no facial contact with each other when he described the locations of the bodies at the crime scene. Only police officers knew such details.

Later Erickson told Deacon Russell Lundgren, “I done it and they are going tocatch me.” The deacon was not under any kind of confessional bond of secrecy but took a somewhat less aggressive approach than that of the police officers. He told no one and prayed that Erickson wasn’t telling the truth. After the second videotaped police interview on December 7, 2004, Bishop Raphael Fliss of the Superior Diocese had a phone chat with Erickson. Erickson told him, “I had nothing to do with those murders. God knows I am telling the truth.” The bishop avoided the excesses of the Inquisition and decided to drop the matter with a phone call. As the diocese spokesman said later “there was no reason not to believe him.”

Two days later on December 19,2004, Erickson hanged himself at his church of sorrows. The priest who “supervised” Erickson for the three years, during which time he murdered O’Connell and was having a teenage boy visit multiple weekends for beer and sex, was Fr. Peter Szleszinski. He said on hearing of the priest’s suicide, “I don’t know who in the world would tell the police something that would make them think Fr. Erickson was the guilty one or the culprit.” He added that Erickson showed no signs of mental stress during his three years at Hudson, “nothing at all.”

Even after Erickson’s hanging, the diocese perceptively proclaimed, “We have no conclusive evidence that Fr.Erickson was involved with the tragic events.” Ten months passed and again it was the civil authorities who told the truth. A John Doe hearing on October 3, 2005 showed “overwhelming evidence” that Erickson murdered O’Connell and Ellison, and that he had, in fact, been abusing a teenage male at Mr. O’Connell’s parish.

In addition to this story, there are other accounts of suspicious deaths surrounding sexual abuse, including the stories of Fr. Joseph Moreno of Buffalo, Fr. John Minkler of Albany,  Fr. Alfred Kunz of Madison, and Francis Pellegrini of Chicago.

Until such time that the bishops truly begin to understand and appreciate the terrible consequences resulting from their failure to address the sexual abuse crisis, we have little hope of actually solving this problem.