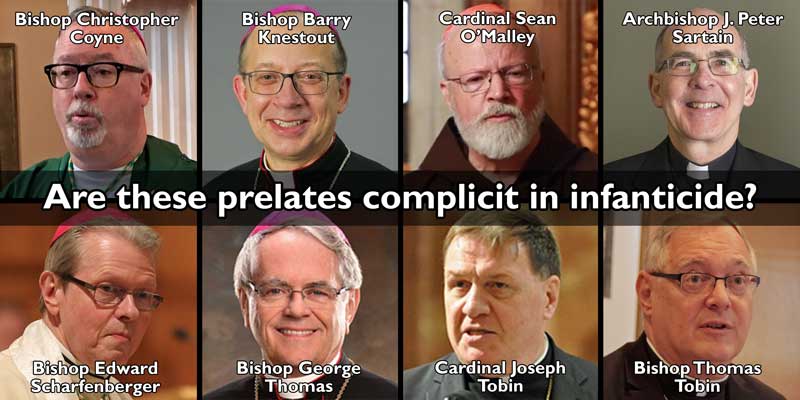 It’s been nearly a week since the U.S. Senate voted down a measure to protect babies who are born alive during botched abortions.  Ten ‘Catholic’ Senators effectively voted in-favor of infanticide by blocking this measure. Thus far, only three Senators have been publicly reprimanded by their bishops.  And only one bishop, Bishop Thomas Paprocki of the Diocese of Springfield, Illinois, has had the courage publicly reaffirm that his Senator, Dick Dubin, cannot receive Holy Communion until he repents of his sin.

Some prelates will undoubtedly use the excuse that they have engaged in “private discussions” with their Senators on this matter.  But this is clearly an inadequate response to such a pubic scandal. Each of these Senators publicly profess to be Catholic. Each has publicly voted in-favor of the killing of babies. Bishops are compelled to likewise make a public response.

Canon 915 dictates that those who “obstinately persisting in manifesting grave sin” MUST be denied access to Holy Communion.  A pastor or bishop who allows supporters of abortion/infanticide to receive Communion is demonstrating to the whole Church that this is not sinful. He is also announcing to the whole Church that he is untroubled by the prospect of living, himself, habitually in the state of mortal sin.

Lawmakers who continue to persist in the manifestation of grave sin ALWAYS causes grave scandal, which in and of itself is a grave sin. Thus, politicians who fail to respond by repenting of their sins should also be excommunicated.

Related Article: Expel the Wicked Person from Among You by Fr. George Rutler

Not only does the sinner need the penalty but so does the community of believers, so that they will not be scandalized, or become spiritually lazy, or even (as St. Paul puts it) “arrogant”. Moreover, the whole body of the Church is to keep itself pure, for she is set apart for the service of God—sensitive to human weakness but taking no part with sinners who would obstinately shift the entire body into evil.

One could easily make the argument that it has been the bishops’ lack of action in the past that has resulted in an environment in which politicians have no fear of supporting anti-life legislation, including the killing of babies who are born alive.  We must have ‘zero tolerance’ when it comes to the murder of innocents.  For the sake of the salvation of souls (including their own), prelates MUST take action in response to this vote.

TAKE ACTION: Contact Prelates of Senators who Voted In-Favor of Infanticide on 02/25/19 and Encourage Them to Act