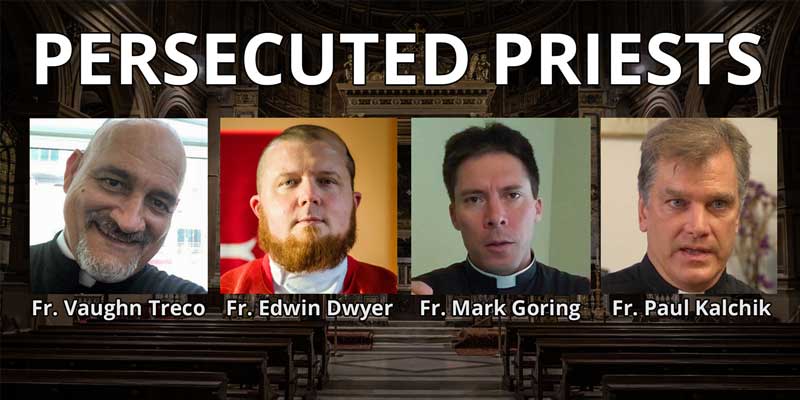 Have you noticed that it seems the only priests who are being silenced by their bishops are those who have the courage to speak the truth?  The most recent example is the story of Fr. Vaugh Treco which has been reported by One Peter Five:

Fr. Vaughn Treco spoke out against the status quo, and so he has been silenced. For this “crime,” he was been removed as parochial administrator, functionally pastor, of my parish. He had his faculties for hearing confessions withdrawn. He was forbidden to preach or offer any reflections or anything of the sort. Nor was the bishop content merely to silence him. Despite the fact that Fr. Treco reaffirmed the Profession of Faith and Oath of Fidelity as requested by Bishop Lopes, he has been threatened with excommunication under a charge of schism. What sort of schism he is alleged to be guilty of I cannot say, but he will not take back the true words he spoke in his homily about what has gone so horribly wrong in the Church.

Fr. Treco’s crime was preaching the following homily on the Feast of Christ the King last November.

While the bishops of New York refuse to excommunicate Catholic politicians who support infanticide, here we have a story of a bishop threatening his priest with excommunication for preaching a truthful homily.

Here are some other recent examples, all occurring in the past 6 months:

Faithful lay Catholics need to start defending true soldiers of the faith from unjust persecution by their bishops.  Here’s contact information for each of the bishops of the priests mentioned in this story.