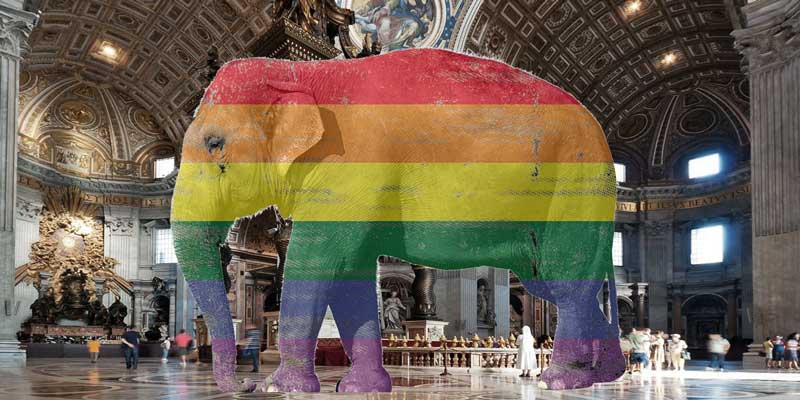 “All eyes and ears will be on the Vatican during an unprecedented gathering Feb. 21-24,” reports Catholic News Service, “to discuss the protection of minors in the Catholic Church.” That’s true — unfortunately, because the gathering is going to be a bust.

The Catholic sex-abuse crisis is not primarily heterosexual or pedophiliac. The Catholic crisis is primarily homosexual. The gathering is going to be a bust because it is only about “the protection of minors in the Catholic Church.”

For more on this subject, see Peter Wolfgang’s earlier article, Catholics Have a Problem. But Is It Celibacy? He answered “No.”

That it is primarily homosexual has been known with sociological certainty since the 2004 John Jay report. That revealed that 81% of the victims were male. And most of that 81% were post-pubescent males.

That’s homosexuality, not pedophilia. Pedophilia is the sexual abuse of pre-pubescent children. And yet both the Church and the media would rather talk about the crisis as if it was mostly just about the abuse of minors in general.

In response to the Pennsylvania Grand Jury Report, dioceses across the country are now releasing lists of priests they deem to have been “credibly accused” of the sexual abuse of minors. Many are also hiring outside investigators to do more detailed reports of their records.

It is an admirable step in the direction of greater transparency and making a fresh start. But it fudges the issue. To be sure, “minors” is a legal term, not a biological one. It includes both pre- and post-pubescent victims.

The public has already known since 2002 that Catholic bishops had covered up clergy sex abuse of minors. Despite the extra and quite gory details, the Pennsylvania report told us something we already knew.

What It Doesn’t Include

So, for instance, my own Archdiocese in Hartford releases its list of credibly accused priests, a list that by its very nature does not include Fr. Kevin Gray. He baptized my oldest child. He’s also the guy sentenced to three years in prison for stealing a million dollars to fund a secret gay lifestyle in New York City. He used the money to pay for male escorts, strip clubs, the works.

It doesn’t include Fr. Michael F.X. Hinckley. He baptized two more of my children. He left the priesthood, “married” a man, and now promotes various gay and transgender causes on his Facebook. And worse? He was once our archdiocese’s bioethics expert. He had a regular column in the diocesan newspaper.

In fact, he was my pastor when I was leading a campaign to overturn our State Supreme Court’s same-sex marriage ruling. My wife was near tears for several Sundays that October, wondering why the Family Institute of Connecticut executive director’s own seemingly faithful pastor was refusing to even mention the campaign from the pulpit. The Church asked every pastor to do so. Now we know why.

And it doesn’t include any reference to this strange story. The subheading says it all: “A 2012 investigation at the Connecticut seminary found evidence of a homosexual network that extended into several dioceses, and despite its findings, some of those involved were subsequently ordained to the priesthood.”