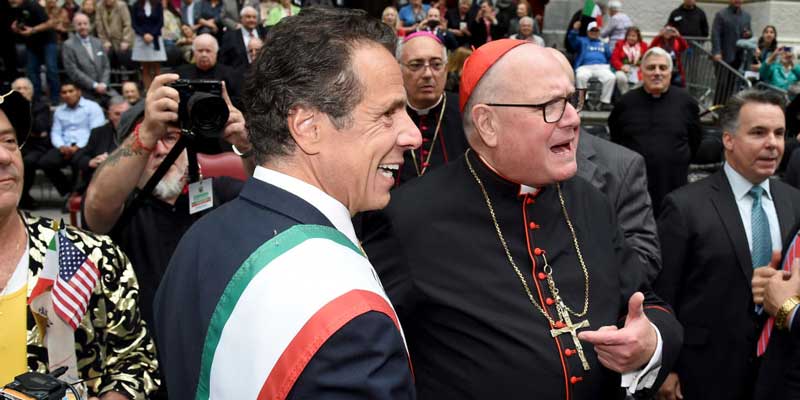 This went out today to priests of the Archdiocese of New York, from Cardinal Dolan. It is to be read at masses this weekend:

My Dear People of the Archdiocese:

Rarely do I intrude on your Sunday Mass, our most sacred time of the week, but in light
of the events of the past two weeks, our priests have asked me to share some reflections on
the radical abortion expansion bill, recently passed by our state legislature and signed with
fanfare and celebration by our governor.

This chilling law, if you have not heard, insists on the right to an abortion up to the
moment of birth; drops all charges against an abortionist who allows an aborted baby, who
somehow survived the scissors, scalpel, saline, and dismemberment, to die; mandates that, to
make an abortion more convenient and easy, a physician need not perform it; and could be
used to suppress the conscience rights of healthcare professionals not to assist in the grisly
procedure. All this in a state which already had the most permissive abortion climate, and one
of the highest rates of abortion, in the nation.

“Before I formed you in the womb I knew you, before you were born I dedicated you.”

Can there be any clearer statement of God’s eternal love for each one of us from the womb to
the tomb, than these words from the prophet Jeremiah in today’s first reading?

In the “throw-away” culture that Pope Francis so often decries, we saw actual
celebrations at the passage of a bill that makes it even easier to dispose of a life that someone might find inconvenient or troublesome, for any reason at all. Those who told us that abortion had to remain safe, legal, and rare, now have made it dangerous, imposed, and frequent.

We also had to watch and listen as our governor proudly proclaimed his dissent from this and other clear Church teaching, as if it were a badge of honor, and used an out-of-context
quote from Pope Francis as an applause line.

I’m a pastor, not a politician, and as a pastor, I am obliged to challenge our political
leaders, to urge them to re-examine their priorities, and to respect and protect the unborn baby
in the womb as strongly and passionately as we should the undocumented immigrant, the
single mom worrying how she will feed her family, our dying grandparents, or the poor
struggling to make it.

At the same time, we can recall the words of Saint Paul in his moving letter to the
Corinthians, from today’s Bible readings, “Love is patient, love is kind…It is not quick-tempered, it does not brood over injury. It does not rejoice over wrongdoing, but rejoices with the truth.”

No matter the hurt, frustration, the disappointment, and yes, even the anger we may feel now
at the passage of this horrific and grisly bill, we should not respond with more bitterness and
divisiveness, but continue to put our trust in the Lord and ask for his guidance and inspiration.

Thank God we have the promise of Jesus that “not even the gates of hell will prevail.”

With gratitude for your attention, and promising my prayers as I ask for yours, I am,

I think I threw up in my mouth a little. The cardinal accurately described the abortion bill, championed by the Catholic governor, as a grotesque moral evil that shocks the conscience. “Horrific,” he says, and “grisly.”

And then, the cardinal turns around and says, but the Bible tells me to play nice.How on earth can you reconcile the first part of this letter with its conclusion? The only thing I can see is that either Dolan does not believe a word of what he’s saying about abortion and the abortion bill, or he is afraid. Cynic or coward — take your pick.