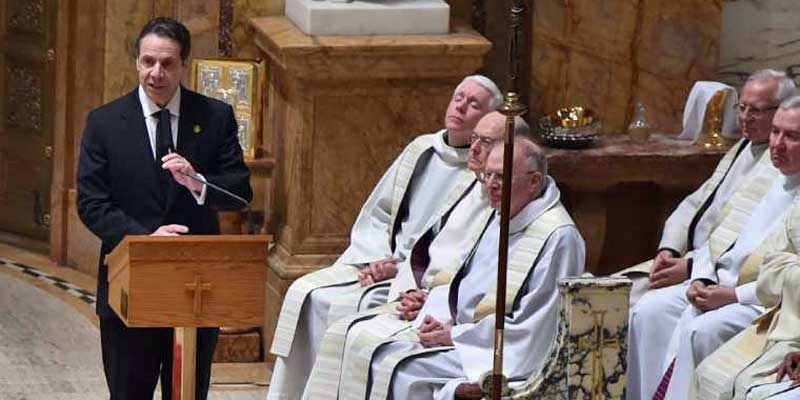 Governor Cuomo’s excommunication should be declared for the good of souls: first of all for his own, but also for the good of those who will otherwise follow him into his grave and public error.

Calls for Governor Andrew Cuomo’s excommunication have echoed across Catholic social media ever since he signed into law one of the most expansive abortion bills ever enacted. Bishops Richard Stika of Knoxville and Joseph Strickland of Tyler have joined the chorus. While noting that Cuomo is under the jurisdiction of Cardinal Timothy Dolan, Bishop Edward Scharfenberger of Albany has said, “Excommunication is a last resort, and as the governor continues to distance himself from our communion, it may unfortunately result in that.”

Cardinal Dolan has responded by saying that excommunication “should not be used as a weapon.”

“Too often, I fear, those who call for someone’s excommunication do so out of anger or frustration,” Dolan wrote. “Notable canon lawyers have said that, under canon law, excommunication is not an appropriate response to a politician who supports or votes for legislation advancing abortion.”

As a canon lawyer with some experience in penal law, allow me to disagree. Many people are pointing out that Cuomo has not violated c. 1398, which provides a penalty of excommunication for the procurement of a completed abortion. However, c. 1364 provides the same penalty for heresy—“the obstinate denial or doubt after baptism of some truth which is to be believed with divine and Catholic faith.”

The obstinate denial or doubt of a credenda teaching is often relegated to the rarified world of academic theology, with many assuming that it can only ever be a willful act by one suitably educated to know better. But heresy does not exist as a purely academic crime, nor is its commission beyond the reach of the Catholic in the pew—or the governor’s mansion.

Read the rest at First Things