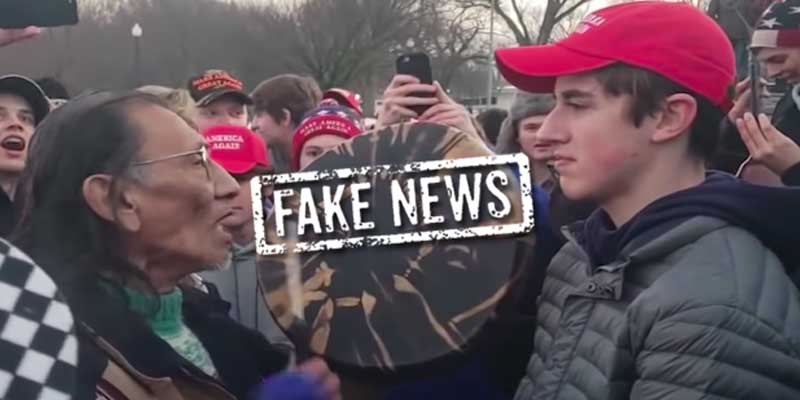 Imagine if half the country turned against you overnight and blasted you with white hot anger, death threats, calls to ruin your future, and much else besides.

Then, instead of shielding you from the abuse and standing with you in love against the crazed mob, imagine if your own parents abandoned you and even actively joined their voices to the chorus of those attacking you.

How would you feel?

Hopefully, all three. But what if your spiritual parents did that? Wouldn’t that be at least as bad?

That is exactly what the Church has done with the Covington travesty currently roiling our public discourse (that is, if our national habit of knee-jerk screeching at the latest pseudo-controversy qualifies as “discourse”).

One of the most beautiful images to meditate on is that the Church—in addition to being the Bride of Christ, the ark of salvation, and more—is also our Mother. You could be forgiven for not knowing that, given the shameful way She has handled this debacle.

Mothers are nurturing. They protect their children. They form them and build them up to be virtuous and God-fearing.

Mothers are tender and often slow to anger, yes. But they also know danger when they see it, and they quickly move to defend their offspring and strike out at any who would harm them. The Church is to imitate God in this manner; of Him it is written “how many times I yearned to gather your [Jerusalem’s] children together, as a hen gathers her young under her wings” (Matt. 23:37).

And if merely human mothers do this instinctually, how much more ought Holy Mother Church rush to our aid when the mob closes in, the social media attacks begin, and the injustices mount?

But that is not what happened. Rather than cover her children with her mercy and protection, the Covington diocese and high school joined in the bloodbath. They eagerly signaled how “woke” they were, how on board they were with the perversion of “social justice” currently practiced and preached by our secular elites and permitted to grow in power by spineless enablers in the Republican Party and much of the “conservative” movement:

We condemn the actions of the Covington Catholic High School students toward Nathan Phillips specifically, and Native Americans in general, Jan. 18, after the March for Life, in Washington, D.C. We extend our deepest apologies to Mr. Phillips. This behavior is opposed to the Church’s teaching on the dignity and respect of the human person. The matter is being investigated and we will take appropriate action, up to and including expulsion.


What nonsense is this?

Before all of the facts are in, the Church immediately sides against the students she personally knows and with a man of whom she has just heard, a complete stranger. What mother, knowing her children intimately, trusts completely a total stranger, particularly when his words ring as hollow and maliciously false, contrary to all her experiences with her children, and then seeks to punish her children without finding out if what was said about them is true?

Read the rest at the Remnant

TAKE ACTION: Contact Bishop Roger Foys at 859-392-1500 or at [email protected] and demand his resignation

The school and the Roman Catholic Diocese of Covington issued a joint statement Saturday afternoon after millions viewed videos of the incident.

“We condemn the actions of the Covington Catholic High School students towards Nathan Phillips specifically, and Native Americans in general … We extend our deepest apologies to Mr. Phillips. This behavior is opposed to the Church’s teachings on the dignity and respect of the human person.”

“The matter is being investigated and we will take appropriate action, up to and including expulsion.”

Excerpt of a conversation between Dr. Taylor Marshall and Timothy Gordon – watch the full video here.