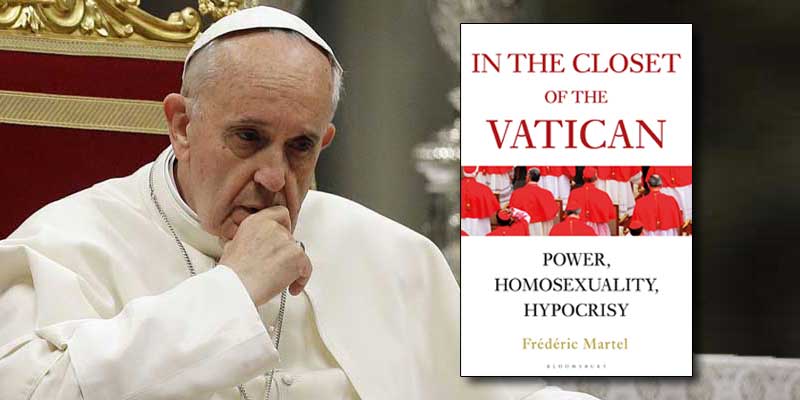 What’s the latest news that might be keeping Pope Francis up at night?  A new book entitled In the Closet of the Vatican: Power, Homosexuality, Hypocrisy is scheduled to be released on February 21, the same day Francis has scheduled to kick-off his Global Summit on Sexual Abuse in Rome.

Pre-Order “In the Closet of the Vatican” at Amazon

Here’s a description of the book’s contents:

In the Closet of the Vatican exposes the rot at the heart of the Vatican and the Roman Catholic Church today. This brilliant piece of investigative writing is based on four years’ authoritative research, including extensive interviews with those in power.

The celibacy of priests, the condemnation of the use of contraceptives, countless cases of sexual abuse, the resignation of Benedict XVI, misogyny among the clergy, the dramatic fall in Europe of the number of vocations to the priesthood, the plotting against Pope Francis – all these issues are clouded in mystery and secrecy.

In the Closet of the Vatican is a book that reveals these secrets and penetrates this enigma. It derives from a system founded on a clerical culture of secrecy which starts in junior seminaries and continues right up to the Vatican itself. It is based on the double lives of priests and on extreme homophobia. The resulting schizophrenia in the Church is hard to fathom. But the more a prelate is homophobic, the more likely it is that he is himself gay.

“Behind rigidity there is always something hidden, in many cases a double life.” These are the words of Pope Francis himself and with them, the Pope has unlocked the Closet.

No one can claim to really understand the Catholic Church today until they have read this book. It reveals a truth that is extraordinary and disturbing.

The book’s author, Frederic Martel, is a is a French writer, researcher and journalist. He holds a PhD in social sciences and several graduate degrees in philosophy, political science and law.  He is  the author of a dozen books including, De la Culture in America (Gallimard, 2006), Mainstream (Flammarion, 2010) and Smart, Survey on Internets (Stock, 2014).

According to a recent story by LifeSiteNews, Martel is a liberal homosexual who writes from a liberal viewpoint.  His mission is to influence the Church to accommodate homosexuality and accept openly homosexual priests.  However, the ultimate result of Martel’s book will likely be to confirm the claims made by of Archbishop Carlo Maria Viganò concerning a homosexual network in the Church.  If Martel’s book exposes the names of powerful homosexual prelates, it is likely to cause significant problems for Pope Francis.

It appears 2019 may be shaping-up to be a tough year for ChurchFrancis.