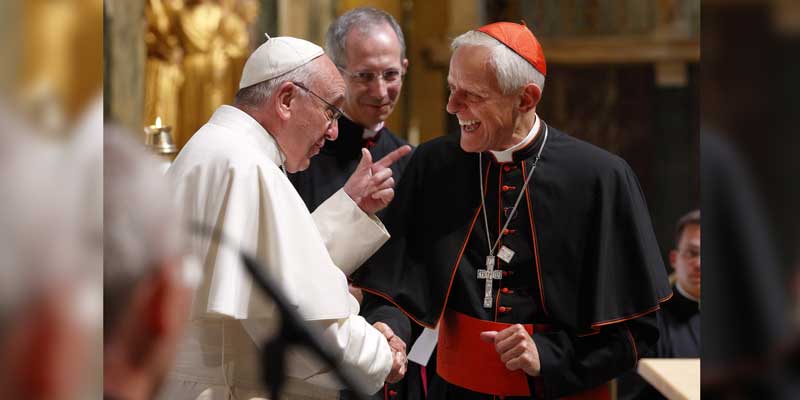 Pope Francis has already made it clear for some time how he judges and how he intends to address the question of sexual abuse among sacred ministers. As a problem not primarily of sex but of power, not of individuals but of caste, the clerical caste.

He gave this to be understood in the letter on this question that he addressed to the “people of God” on August 20, 2018, in which he never mentions “sexual abuse” on its own, but in the combination of “sexual abuse, the abuse of power and the abuse of conscience .”

He reiterated it in this year’s January 1 letter to the bishops of the United States, in which he continues to systematically use the triple formula, but changing the order: “the abuse of power and conscience and sexual abuse.”

He restated it even more explicitly in the closed-door meeting he had in Dublin on August 25 with the Irish Jesuits (see photo), carefully transcribed and published by Fr. Antonio Spadaro in “La Civiltà Cattolica” of September 15: “Elitism, clericalism fosters every form of abuse. And sexual abuse is not the first. The first abuse is of power and conscience.”

The final document of the synod of last October, in the paragraphs concerning sexual abuse, also made this theorem of Francis its own, attributing the cause of everything to “clericalism,” meaning “an elitist and exclusivist vision of vocation, that interprets the ministry received as a power to be exercised rather than as a free and generous service to be given.”

Against this backdrop, the convocation in Rome of the presidents of the episcopal conferences of the whole world, scheduled from February 21 to 24, should be according to the pope’s intentions the calling to account of an organic representation of the clerical caste, before which he would present himself as the alternative and immaculate authority, entirely at the service of the powerless and the victims of power.

That’s the way it should be, in Francis’s plan. But meanwhile, events are moving in the opposite direction.