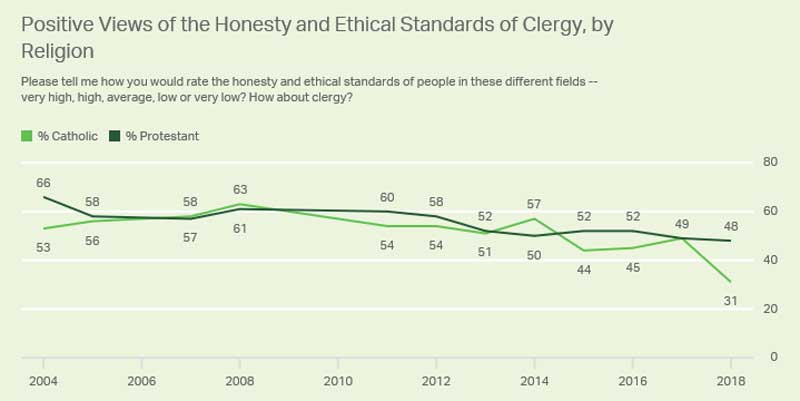 Trust in the clergy has declined sharply over the last year, a new Gallup poll shows. Only 31 percent of American Catholics now rate the honesty or ethical standards of the clergy as “high” or “very high.”

The figures, released Friday, show a drop of 18 points since 2017. Among American Protestants, the same question produced a relatively stable number of 48 percent, a drop of only one point since 2017.

The survey was conducted between December 3-12 and surveyed 1,025 adults.

Since that poll was taken, the Church in the United States has suffered a number of abuse-related scandals, including the resignation of Archbishop Theodore McCarrick from the college of cardinals following multiple allegations of sexual abuse, and the release of the Pennsylvania grand jury report that reported allegations of widespread clerical sexual abuse in that state over a period of several decades.

Church leaders have faced a mounting series of questions in recent months, with many being asked to make clear when they first became of aware of allegations against bishops like McCarrick.