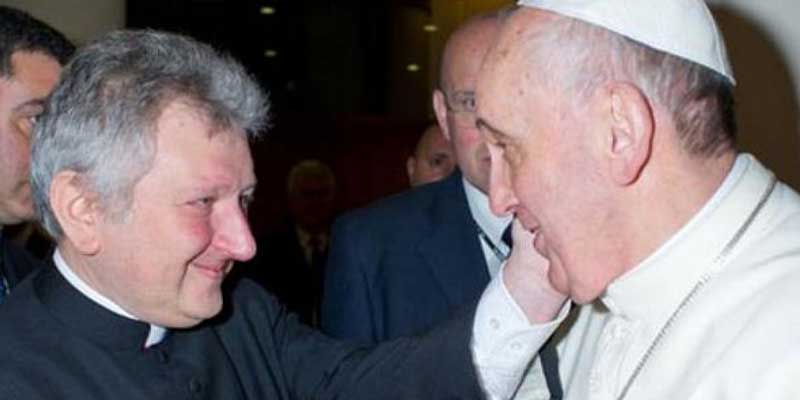 I’ve been under the impression for a while now that everyone knew about Msgr. Battista Ricca, who is the director of the Casa Santa Marta (where the pope lives) and was the pope’s hand-picked liaison – his “eyes and ears” – on Vatican Bank reform.

But I saw a post from a well informed Catholic this week indicating that he hadn’t heard the story. So I decided it would be of value to repeat what I know here (as I have already done on social media). Faced as we are with the issue of homosexuals in the clergy, it is important to know that it was in the context of a question about Ricca that Francis first infamously said, “Who am I to judge?”

As I reported last year:

Also of note is the fact that the pope’s hand-picked liaison to the now-stalled Vatican Bank Reform, Msgr. Battista Ricca, was claimed to have outraged church figures in Uruguay during a diplomatic posting in 1999, when he moved “his lover, Patrick Haari, a Swiss army captain, in with him”, only to later have Haari forced out by apostolic nuncio Janusz Bolonek in 2001. Ricca was caught later that year in an elevator, where he was “trapped with a youth known by local police” after being attacked at a “cruising ground” – a meeting place for area homosexuals. There is no indication that Ricca has been removed of his position as Prelate the Vatican Bank, despite indications that his past was hidden from the pope and reports of his offered resignation as long ago as 2013. Less well known is the fact that it was in reference to a specific question about Msgr. Ricca that Pope Francis infamously responded, “Who am I to Judge?”

So what was the context for the pope’s infamous comment? When Francis was flying back from Rio for World Youth Day in 2013, he was asked the following question, and he gave the subsequent answer.