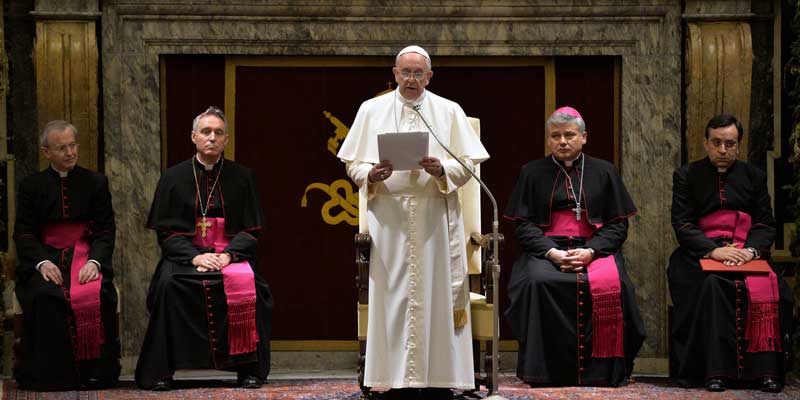 “To those who abuse minors I would say this: convert and hand yourself over to human justice, and prepare for divine justice.” Those were the words upon which reporters rightly seized, and from which headline writers took to craft their hooks, when Pope Francis delivered his annual “state of the Church” address to senior officials of the Roman Curia on Friday.

The words echoed Pope St. John Paul II’s passionate denunciation of organized criminals delivered on May 9th, 1993. “In the name of the crucified and risen Christ, who is the way, the truth and the life,” Pope John Paul II intoned in remarks to the faithful gathered in the Sicilian city of Agrigento, “be converted, one day the judgment of God will come!”

One significant difference is that John Paul II’s remarks were extemporaneous, turgid with genuine ire, delivered in the midst of a mafia terror campaign that had already claimed the lives of two high-profile anti-mafia prosecutors, Giovanni Falcone and Paolo Borsellino, and would see more attacks later that same year in Rome, Florence, and Milan. Pope Francis’s remarks two days ago were studied, calculated, scripted. More to the point, Francis is rather better positioned to assist the clerics guilty of abuse in coming to face human justice, than was his sainted predecessor to help members of la cosa nostra come into the reach of the same.

If Francis had given Friday’s speech — at least that section of it — in 2013, and followed it with concrete action taken swiftly and transparently, things might be different. Then again, he did say similar things in 2013. “Act decisively as far as cases of sexual abuse are concerned,” Pope Francis urged then-Prefect of the Congregation for the Doctrine of the Faith, Cardinal Gerhard Müller, “promoting, above all, measures to protect minors, help for those who have suffered such violence in the past [and] the necessary procedures against those who are guilty.”