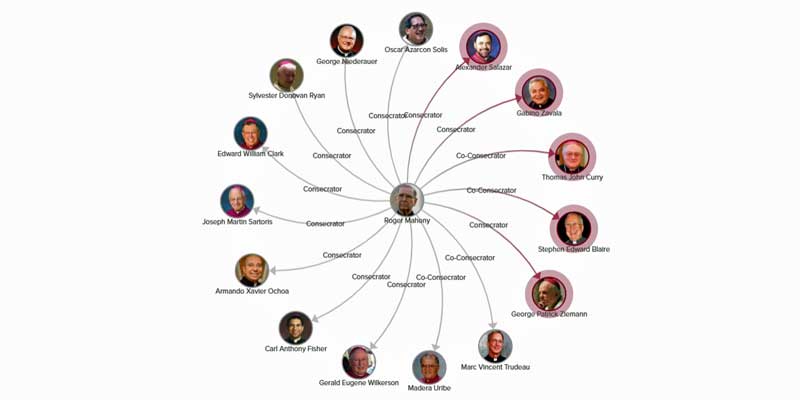 Click on the bishop’s photo in the diagram above to read about their scandal.

Former Los Angeles Cardinal Roger Mahony is long retired, but his scandals keep exploding like ticking time bombs around the feet of his successor. The latest eruption was this week’s revelation that Mahony had elevated Monsignor Alexander Salazar to auxiliary bishop in 2004 despite a credible allegation of abuse against Salazar from the 1990s. Mahony’s successor, Archbishop Jose Gomez, announced that Salazar’s resignation flowed from “deep concern for the healing and reconciliation of abuse victims and for the good of the Church’s mission.”

The Church has known about the allegation against Salazar for at least 13 years and in all likelihood much longer, but only got around to forcing Salazar’s resignation this week, presumably out of a PR need to tidy up such cases before Pope Francis’s “abuse summit” next February, and perhaps also out of fear of exposure by approaching investigators.

In anticipation of that gathering in February, Pope Francis vowed in a speech before cardinals this week that abuse cover-ups would “never” happen again, a promise that he can’t even keep in the most obvious case — the ongoing scandal of Theodore McCarrick, who remains holed up in a Kansas friary next to a school and tourist site while his criminal defense attorney issues protestations of innocence to the press in his name. Never happen again? The cover-up is happening right now.

Salazar, by the way, is only the most recent Mahony-era auxiliary bishop to disgrace the Church. Mahony really knew how to pick them: in addition to Salazar, he selected Gabino Zavala, who had a secret family, and then earlier he selected Patrick Ziemann, a repeatedly accused molester whose ecclesiastical career was punctuated by an affair with an embezzling priest at one of his parishes (the priest also claimed coercion).