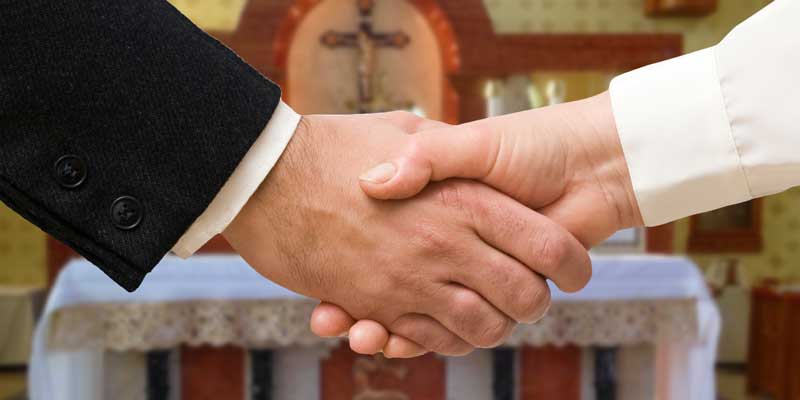 The Catholic Church continues to be rocked by highly credible allegations, most powerfully voiced by Archbishop Carlos Maria Viganò, of homosexual corruption in the highest echelons of the hierarchy. The rot appears to run from the top down to the level of dioceses and seminaries, where countless adolescents and seminarians have suffered sexual predation at the hands of men who should have been their spiritual fathers. The problem appears to be virtually universal in Europe, Latin America, and the Anglophone world. The Church now finds itself in what may be the most wretched state of moral decadence that it has ever suffered in its long history.

It might seem that the Catholic Church is simply suffering from a particularly virulent infiltration of the clergy by a powerful and extensive fifth column, one that only must be detected and rooted out to eliminate the problem. Indeed such exposure is crucial to winning this battle of Catholic restoration, and that is a work to which LifeSite and many other Catholic journalists and activists are dedicated. However, I would argue that it isn’t remotely enough. The reality is that the crisis is a far more general one, and largely stems from a perverse pact made between a degenerate clergy and a deeply corrupt laity. Until both the laity and the clergy are reformed, we will never extricate ourselves from this terrible crisis.

Any casual observer of the ecclesiastical scene can find countless examples of parishes that are served by a weak and effeminate “Fr. Feelgood” (perhaps accompanied by his assistant, the ever-dissenting “Sister Angrynun”), whom we can easily blame for the compromised moral and spiritual state of the parish. “Fr. Feelgood” tends to create in his parish a watered-down version of the Catholic faith in which notions of sin, sacrifice, and salvation are deemphasized or eliminated in favor of a low-content sentimentalism that tends to affirm the carnal mentality and worldly tendencies of the congregation. “Fr. Feelgood” may be an outright homosexual or merely a “tame” beta male who exhibits a similar mentality, but the effects of his leadership (or lack thereof) will tend to be the same.

However, what is often overlooked is the more silent and passive but equally essential element in this perverse partnership, and that is the laity of the parish who seem untroubled and even grateful for Fr. Feelgood’s weak character and pandering ministry. Underlying this attitude is a troubling fact that is passed over in silence, and that is that virtually all of the sexually-active members of the parish are themselves involved in the sin of sodomy.

Contraception has always been understood in the Catholic Church as a grave sin against nature, a perversion that is similar to other abuses of the sexual act that deny its natural unitive and procreative purposes. Couples that use artificial birth control are seeking the pleasure of sexual intercourse in a way that denies its ultimate end, which is to bring forth life and simultaneously to reinforce their marriage union for the purpose of cooperating in the education of their children. Instead, they are seeking the pleasure of the act as an end in itself, and treating the body of their companion as an object of lust.

A recent Pew Research poll (p. 26) reinforced what previous research has demonstrated repeatedly about the attitudes of Catholic laity regarding contraception. It found that of those Catholics who attend mass weekly only 13% regard contraception as “morally wrong.” Of the rest, 45% say it is morally acceptable, and 42% say it’s “not a moral issue,” in the words of the poll. This is reflective of so many other studies that have found a similar acceptance of contraception. There can be no doubt that the vast majority of sexually-active Catholic couples are engaging in this destructive vice.

The contraceptive mentality, which separates the sexual act from reproduction and reflects a hedonistic and narcissistic ethos, leads easily to other sins. If the ultimate purpose of the sexual act isn’t reproduction, but just selfish pleasure, then why should couples marry at all? Extra-marital sexual activity and cohabitation easily follow from this conclusion, as well as abortion when the “unwanted” unborn child inconveniently enters into the picture – after all, if people have a right to their selfish pleasure without consequences, an unborn baby is seen easily as an intruder in their relationships.

At the end of this continuum of perversion are the worst abuses of the sexual act, which themselves follow from the logic of contraception. Among them is the vice of homosexual sodomy, which differs from heterosexual contraception not so much in kind, as in degree.

That’s why St. Peter Damian, the Catholic Church’s greatest defender of sexual morality among all of its canonized saints, regarded the contraceptive sin of Onan in the Old Testament as a type of sodomy. Onan engaged in the most simple and easiest form of contraception, withdrawing from his brother’s wife and “spill[ing] his seed upon the ground” (Gen. 38:6-10). God struck Onan dead for this evil act – even though the penalty for not bringing up offspring for one’s dead brother was not death, but public humiliation – because Onan had perverted the sexual act.

“Certainly, this disgrace (sodomy) is not unworthily believed to be the worst of all offenses,” writes Damian in his Book of Gomorrah, which he wrote to denounce a crisis of sodomy among the clergy and monks of his day. He soon adds: “[God] struck Onan, the son of Jude, with an untimely death because of this nefarious offense, according to the Scripture, which says, ‘Onan … knowing that the children should not be his, when he went in to his brother’s wife, he spilled his seed upon the ground, lest children should be born in his brother’s name. And therefore the Lord slew him, because he did a detestable thing.”