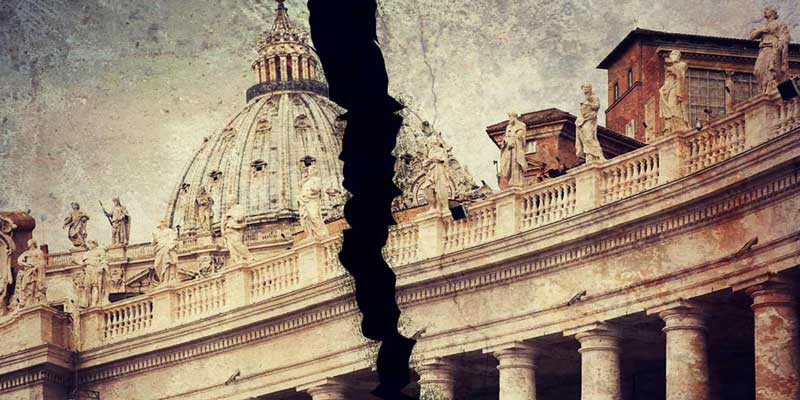 At his longtime blog, Creative Minority Report, 1P5 and Remnant contributor Patrick Archbold has a five-part series about “actuating” the schism in the Church. Some of you are going to want to read the whole thing, but I’d like to offer a Cliff’s Notes version here by way of introduction.

In the first installment, Archbold begins with a quote attributed to Pope Francis back in 2016 – which we covered here– wherein he is alleged to have said, “It is not to be excluded that I will enter history as the one who split the Catholic Church.”

“That quote,” Archbold writes, “is from Der Spiegel. But it is Spiegel’s correspondent in Italy, Walter Mayr, who characterizes that statement as self-critical. Based upon all the evidence to date and what I think may be coming, I suspect that is a misreading of the statement. The Pope wasn’t being self-critical, he was telling you the plan.”

He was telling you the plan.

For years, something it appears that many Catholic commentators have missed in trying to make sense of the current papacy is that gaffes, well intentioned mistakes, malformation, and even outright incompetence do not explain the Francis phenomenon.

I can’t read hearts and minds, and I certainly can’t read souls. But I can tell you where the evidence points. And every indication I’ve seen shows that Jorge Mario Bergoglio, the man who became Pope Francis, looks at the Catholic Church as it exists with destruction and reconfiguration at the forefront of his mind.

Archbold uses as a launching point the obvious manipulations of both synods on the family, and then the absolutely transparent fait accompli that was the Youth Synod this past October. Archbold writes:

Not only did they do away with all the rules in advance and pack the synod with the pliant, but they actually published a synod document that was substantially about a topic that wasn’t even discussed at the synod, synodality itself.  You must hand it to these folks, they are the honey badgers of heretics, they just don’t care.

Archbold argues that the ramping up of synod-rigging came in direct response to “faithful Catholics” who have been “very loud and have caused them more problems than they are willing to put up with.” (Yes. He’s talking about you and me, among others.) His thesis is that the Church “has been in a de facto state of schism for some time” but that while those who reject the Church’s teaching used to just refuse to leave, now “they are in charge.”

“They didn’t want their own Church,” he writes. “They wanted ours. Now they have the power and they use the power.”

The overarching question that follows is, how do they rid themselves of the Catholics who are fighting against their power? Or, more to the point, “How do you turn a de facto schism into a real one?”

In part two, Archbold argues that those who are now in power in the Church “have been putting in place mechanisms that will give faithful Catholics no quarter.” And by no quarter, he means:

It is his theory that this mechanism – forced disobedience – will be used to “separate traditional Catholics from the Church.”