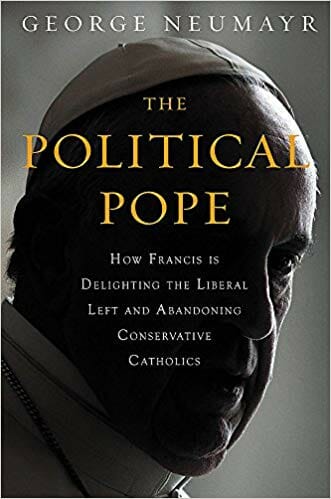 Pope Francis is the most liberal pope in the history of the Catholic Church. He is not only championing the causes of the global Left, but also undermining centuries-old Catholic teaching and practice. In the words of the late radical Tom Hayden, his election was “more miraculous, if you will, than the rise of Barack Obama in 2008.”

But to Catholics in the pews, his pontificate is a source of alienation. It is a pontificate, at times, beyond parody: Francis is the first pope to approve of adultery, flirt with proposals to bless gay marriages and cohabitation, tell atheists not to convert, tell Catholics to not breed “like rabbits,” praise the Koran, support a secularized Europe, and celebrate Martin Luther.

At a time of widespread moral relativism, Pope Francis is not defending the Church’s teachings but diluting them. At a time of Christian persecution, he is not strengthening Catholic identity but weakening it. Where other popes sought to save souls, he prefers to “save the planet” and play politics, from habitual capitalism-bashing to his support for open borders and pacifism.

In THE POLITICAL POPE, George Neumayr gives readers what the media won’t: a bracing look at the liberal revolution that Pope Francis is advancing in the Church. To the radical academic Cornel West, “Pope Francis is a gift from heaven.” To many conservative Catholics, he is the worst pope in centuries.