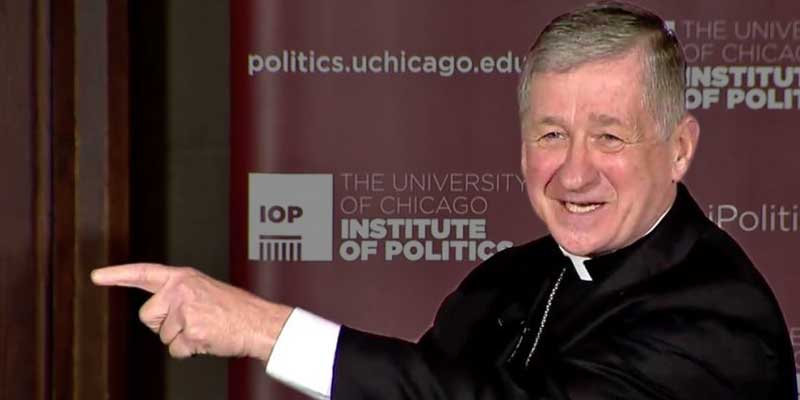 If you held out any hope that the Vatican might finally respond effectively to the sex-abuse scandal—that the February meeting could possibly prompt some real action—those hopes should have been shattered by the stunning announcement that Pope Francis had appointed Cardinal Blase Cupich to the organizing committee for that February event.

This is the same Cardinal Cupich who said, regarding the latest eruption of the scandal, that the Pope was “not going to go down a rabbit hole on this.” If you want to start a serious discussion of the abuse question among the world’s top Catholic prelates, you need to get past the gatekeeper. And at least one gatekeeper for this February meeting thinks that if you go through that gate, you’ll be headed down a rabbit hole. Good luck.

You’d like to think that in February, the presidents of the world’s episcopal conference will recognize that they are dealing with a scandal of immense proportions, a scandal that threatens the evangelical mission of the Church. But again, Cardinal Cupich told a TV interviewer that the issue shouldn’t be overemphasized. “The Pope has a bigger agenda,” he said, and as a first example of those “bigger” issues he mentioned “talking about the environment.”

Ordinarily, if you’re planning a conference, you’d choose organizers who take a special interest in the subject at hand. Cardinal Cupich has made it abundantly clear that he does not regard the sex-abuse scandal as a matter of paramount importance. Yet the Pope chose him to help organize this conference. Why?

To answer that question, let’s look at the second reason why the selection of Cardinal Cupich is astonishing.

The scandal that erupted this summer, and prompted the Pontiff to schedule this meeting for February, involved three issues: sexual abuse by clerics (as illustrated by the Pennsylvania grand-jury report), the unmasking and forced resignation of former cardinal McCarrick, and the testimony of Archbishop Vigano that Vatican officials, including Pope Francis himself, were previously aware of McCarrick’s perfidy. Only one of those issues—sexual abuse by priests—is on the agenda for the February meeting.

The subject for the meeting is “the protection of minors.” Period. There is no mention—at least not in the Vatican’s announcement of the event—of homosexual activity among the clergy, of homosexual influence in the hierarchy, of how McCarrick rose to ecclesial power, or of the Vigano testimony.

Some bishops would like to see the scope of the Vatican inquiry expanded to include those other topics. To be specific, more than 80 American bishops have called for a formal Vatican inquiry that might clear up the questions raised by the Vigano testimony. Cardinal Cupich is not one of those prelates. On the contrary, he has dismissed the Vigano testimony. So it’s fair to assume that as an organizer of the February conference, he will work assiduously to keep a tight focus on “the protection of minors.” And that, I suggest, is the reason why he was appointed to the organizing committee.

But I’m not finished yet. In his eye-opening testimony, Archbishop Vigano said that Cardinal Cupich is one of the American prelates whose rise through the ranks can be traced to the influence of the disgraced McCarrick. True, that charge is unproven, but neither is it disproven. Any serious Vatican inquiry would be forced to weigh the truth of Vigano’s claim. But now the cardinal who should be under a microscope is instead sitting on the organizing committee—in an ideal position to block uncomfortable questions about his own possible involvement to the scandal.