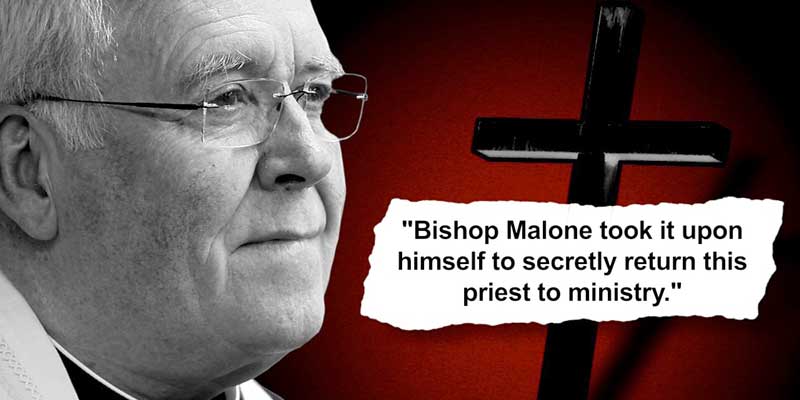 At a news conference two weeks ago, Buffalo Bishop Richard J. Malone said he had a good record on dealing with sexually abusive priests.

“You call it cover-up, we call it confidentiality,” he told reporters.

Malone pointed to his time in the Diocese of Portland, Maine, where he served for eight years before coming to Buffalo.

But on the ground in the bishop’s old diocese, advocates for victims of sexual abuse and new documents obtained by the 7 Eyewitness News I-Team paint a much different picture of the bishop’s past — especially when it comes to dealing with sexual abuse.

“The Bishop Malone that I came to know here in Maine…is an actor on a stage,” said Paul T. Kendrick, an advocate for victims of sexual abuse in the Diocese of Portland. “Malone is a fake, a phony. He’s not telling the truth when he likes to say, ‘I never knew.’”

Kendrick sparred with Malone many times, calling for him to be more transparent about abusive priests in his diocese. His battles with Malone drew national attention when the bishop threatened to deny Kendrick Holy Communion after claiming Kendrick’s actions constituted “harassment.”

But even Kendrick didn’t know about the contents of two confidential documents obtained by the I-Team that describe how Malone handled abuse controversies involving two accused priests in Maine.

The documents are summaries of two separate investigations conducted by John S. Brennan, former director of the Office of Professional Responsibility for the Diocese of Portland under Malone.

Brennan, who is also a Catholic deacon, joined the diocese after a 30-year career in law enforcement, where he advanced to leadership positions within the Portland Police Department, retiring as deputy police chief.

Brennan declined an interview request because he is cooperating with FBI agents in Maine, but he confirmed the authenticity of the documents to the I-Team.

‘Cover-up of the highest order’

“With respect to the Vatican and Bishop Malone,” he wrote in one report, “this was a complete cover-up of the highest order that cannot possibly be explained or defended and still screams out for justice.”

That case unfolded in 2004 at St. John the Evangelist Church in South Portland, where the Rev. Paul E. Coughlin was suspended for befriending a violent sex offender and allowing him to live in the parish rectory.

The sex offender was John Skinner Sr., a Maine man who was sentenced to 18 years in prison, with all but five years suspended, for sexually abusing two boys he met through Catholic church youth groups, according to news reports from the Bangor Daily News.

In his investigative reports, Brennan described what he called two “outrageous situations” Regarding the pedophile and the priest.

The first involved a 15-year-old boy whom Skinner allegedly raped. The report said Skinner brought the boy to Father Coughlin, who failed to call the police, as was required by Maine law. Later, according to the report, Father Coughlin tried to get Skinner hired as a youth minister at his parish and allowed him to live in the parish rectory — steps away from a parish center frequented by kids.

“Are you kidding me?” Kendrick said. “You have a man who served time, been convicted of child sexual abuse, rape…you have him living in your rectory?”

Brennan wrote that after his investigation, the Vatican issued “a mild rebuke” of Father Coughlin and allowed Bishop Malone to remove him from ministry.

But after two years, “Bishop Malone took it upon himself to secretly return this priest to ministry,” the report states.